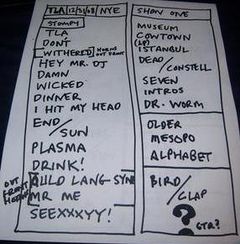 Well. This was a great show. This being my FIRST TMBG live experience (about time too), and I made sure to attend both of the nights shows, I have to say I was pleased. I also have to say that this first show was my favorite.

I was sure to get close to the stage for both, deciding with my friend to be at Flansy's feet for the early show, then Linnell's for the late one. This was probably a great decision, as Flans had tons of energy, jumping around and what not like he forgot this wasn't the Flood tour. By the second show, he was still pretty energetic, but not as so. And Linnell, by nature of his instrument is pretty stationary no matter what.

The TLA intro was predictable, but fantastic. Don't Let's Start made its only appearance of the night early, and was a good High-energy opener. Withered Hope and Hey Mr. DJ surprised me, when they came up, and were great with the Horns, who blew my mind with their chops. Damn Good Times is a favorite of mine, with it's hard guitars, and the arrangement is awesome live. A definite highlight.

Oddly enough, I think my friend may have had something to do with the banter before Wicked Little Critta. Flans commented that he wouldn't start the song until people stopped swearing "In this culture" (Read more about it in the writeup somebody else did at the top of the page). My buddy did some self censoring, singing along "dang good times" instead, and did so pretty loudly. I could swear Flans heard him, cause he started laughing during the instrumentals. He also whispered something into Dan Miller's ear, which caused him to laugh a bit. That might have brought the swearing topic to the forefront of our man Flansy's brain. Probably crazy, but worth mentioning...

Wicked Little Critta is great fun live. Dinner Bell caught me pleasantly by surprise, but I was ecstatic when Unsupervised, I Hit My Head began. For 2 reasons. 1 Being that's the best Mono Puff song ever, and 2 it surely heralded a soon-to-be-played State Song, but that wasn't the case. I was pretty thrown by that decision, but happy for Unsupervised nonetheless.

The End of the Tour was also a big surprise, and one of my favorites. Linnell not getting the keyboard patch he wanted was hilarious, and he sold it like a pro.

The Sun songs were crazy fun. Flansy's "Failed Presidency" felt a little played out what with Obama winning and all that, but after expressing his gratitude at being able to retire the bit I understood. It's always fun to see how he's gonna change the "factual" bits up from show to show. I really appreciated the melodic "It's about NIN-ty three MIL-lion MILES a-WAY!" And it's great fun to hear the band poke fun at themselves, deal with audience participation and such between the two songs. Flansy takes off his guitar and really works the crowd for Plasma.

Drink was appropriate, and I think Auld Lang Syne really WAS a rehearsal, as Linnell joked. The Horns made that evening and that song really festive.

Mr. Me was awesome, and pretty unexpected. S-E-X-X-Y was still another surprise, but even more so was the way they did the ALBUM style ending, with Linnell on clarinet. Amazing. Museum of Idiots wasn't entirely unexpected with the presence of the horns, and the clarinet totally telegraphed Cowtown on the set list, which made me very happy. The Horns did great on Istanbul, and Dead is always a beautiful, heart-felt live singalong. See The Constellation knocked my socks off, and Seven was great too.

During the TLA Intros, after being introduced, Marty proceeded to flail pretty randomly and crapfully on the drums. Flans was VISIBLY annoyed and jumped back into the intros with "Marty's playing drums like he's playing shitty drums." Which I thought was hilarious.

The late show found Flans introducing Marty more than once with a little more gusto as "King of the drums," followed by much more fluid drum soloing, which was also hilarious.

Doctor Worm finished the show on a great note, and the calls for encores rang out quickly. Older was incredible. Flans stepped out alone, with a distorted version of the Older melody unaccompanied. He held out his guitar for the final 3 notes, letting front row audience members strum the chord. I was mere inches away, which totally bummed me out.

Mesopotamians and Alphabet of Nations were great, and I would've felt the show complete if they were done after 1 encore. But yet more had the band in store.

Clap Your Hands got the crowd re-energised, and by that time the word "Birdhouse" had been reverberating throughout the audience for sometime. As soon as it started, Birdhouse in Your Soul heralded the end of the show for sure, and was met with a lot of jumping. As always it was a huge number. The Guitar was just icing at that point. Sweet, melodic, solo-filled icing.

All in all, probably the best live show from anybody I've ever been to. Even better than the late show. The diversity of the set list, energy and hilarious banter made it everything I expected from TMBG. They made my first show a really great one.

This show was the best by far I've attended, the midnight show and Gigantic recording had nothing on this.The idea of an all album show just blew me and my friends away. TLA's outdoor weather was just attrocious but the show made up all for it. Dont let's Start ,Mr.Me and Cowtown simply took me off my guard hearing them played these days. Still loving the Philadelphia choreography each time. I wanted to dance along but the spacing was not all so great. Corn Mo's act kept me laughing to this day hoping to see him next tour around here. Flansburgh's last bash to Bush's term as president was epic and his Obama sticker to top it off. I dont know much words that could describe the entire show it was that great

Also I met up with Dan Miller briefly after this show, along with that dude from his Electro-Harmonix demos.