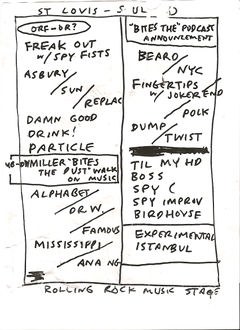 When asked their least favorite gig in an interview with Spare The Rock, Spoil The Child, this was the first show that came to Flansburgh's mind, which Linnell confirmed was "terrible" and "one of the coldest gigs we've ever played."

My first TMBG show. I drove about 9 hours to see it and it was a blast. 2 bad things happened. Power went out for awhile. Also some bald guy was being a real prick grabbing kids and yelling at them for dancing? I later found out that he was trying to protect some lady in a wheelchair or something of the sort but either way they should of figured something else out that would of worked better for everyone instead of not allowing people to get up and move around and have fun at a concert and while just acting like a prick all the way around, he wasnt very nice about it at all. All and all the set was pretty fast paced and alot of fun and I had a awesome time regurdless of that ass hole guy.

I drove out to St. Louis from Kansas City with my dad for this, which would be my first show. I arrived at the stage about 30-45 minutes before the show, and was able to get in about the 4th row. About 10 minutes before the show the fans near me started to get restless. They started yelling for the band, and cheered whenever the roadies came out. Finally the band came out and announced the first song Asbury Park and continued into Why Does The Sun Shine? including the best lyric ever "The heat and light from the sun are caused by the nuclear reaction between a failed foreign policy, a failed domestic policy, and a failed presidency." Before Drink! Flans instructed the audience after every time they sing drink to yell "Drink Drink". Also, sometime before the power went out, Flans also asked who came up with the idea for this show, and said that the band was closer to the audience than ever before, because, during the preceeding song, every member of the band's hands had gone numb. The band came back on stage and played New York City, then announced that they had saved the best 5 for the middle. The show was one of the most enjoyable experiance I've ever had. This has proved to me that they are without a doubt giants

This was, perhaps, the coldest show I have ever been to. Flans said that it was "26 degrees with a windchill of 25." Also, towards the end, I do believe that he said, "This was our weirdest show ever." I suppose that this should be documented somewhere. Word.

OMG, coldest freakin' show ever! I go to school at Wash. U. in St. Louis & while the band plays in the city on occasion it always seems to be when I'm away. So, having gotten the e-mail that they'd be playing when I actually could be there, I faithfully marked it on my calendar. Lo & behold, the day came & it was utterly freezing. Muddy above me says 26, yet I think after it all it was well on the way to hitting zero. So...driving in the city is far & away painless (at least, compared to NY, my home town), such that I didn't realize how awful it would be this day. Once you hit the city traffic is crawling & the drunkards fill the street like mindless zombies searching, instead of brains, alcohol & sex. Someone even offered me $25 to drive them home. Needless to say I declined (even if there weren't the concert, the emanating stench of alcohol made me think they'd vomit in my car & ain't nothing worse than frozen, smelly barf in an enclosed space). The show was great, my fingers & toes did not fall, & I'm glad I'm alive to see venture into the future.