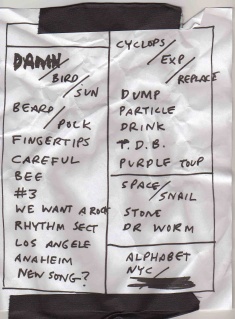 during fingertips, flans said I'm Havin' A Heart Attack "girl, you know it's true! / H-E-A-R-T attack to you / And if we die before we freak / Just remember...I will ALWAYS love you" his banter always makes me giggle. yeah this show was magical, confetti cannons and a great set and two encores and everything. upon hearing it was my first show, a guy standing infront of me let me take his spot in front (thank you so much!) and i could almost touch their shoes. i cried during [new york city] and it was wonderful

Wow. What to say other than this show ruled. I had a really great time. The set was amazing to say the least. I managed to snag one after the show was over, literally out of the air. We got there around 4pm expecting to be the first ones in the line, but this definitely wasn't the case. There was a group from Dayton (I can't remember their names, and if they see this, please contact) that we stood behind. A woman came out and handed out free TMBG foam fingers, which was cool as well. For this show I wore my 1990 Flood Tour shirt with the Flood emblem on the front. The wait outside was more bearable when the sun started going down. Once inside, I immediately bought an autographed copy of the Venues DVD, for only 20 dollars, which included a free cassette of the "They'll Need a Crane" EP. Awesome. I'll write more about this tomorrow morning....

My first TMBG concert in 8 years, and it was all I hoped it would be. Highlights of the show included the audience participation during Drink!; Flans had the audience shout "No, wait!!!" after every mention of "Drink", he said it was an intervention for the band. Flans had us break out the cell phones for Careful What You Pack, and he complemented my friend on having the largest display screen he had ever seen on a phone. I was very impressed with all of the new songs, especially The Cap'm. I yelled "Great song!" and Linnell thanked me. In my opinion, the best performance of the night had to be Doctor Worm, with Miller rockin' on the keyboard and the three-part harmony, the energy was awesome. I managed to get the soundboard setlist, and then I lost it at the merchandise table when I was buying a shirt!  :(.....

I also picked up Venue Songs and Leviton's CD, which I got signed by him and the Glockenspiel girl. Leviton had a great set too, his opening song really got the crowd on his side, and he finished strong with the glockenspiel songs.