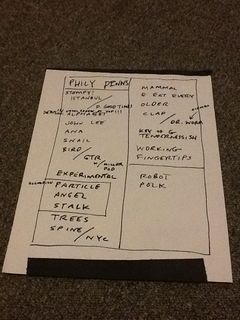 The audio quality of this show is stupendous for the most part. The vocals sound a tiny bit muffled, but the fullness of sound and true live feel of this show definitely makes up for it. There seems to be some mixing issue in the beginning, but things settle in quickly. It seems like as the shows go on, the audio quality gets consistently fuller and less clinical. Absolutely no clipping or distortion (which plagues the early show downloads). The instruments and vocals have that live sound to them, which I enjoy. My one main complaint is that the audience mics aren't there enough. I don't mind a bit of chit-chat when it means that it sounds like you are there in the audience. During "John Lee Supertaster," Flansburgh's mic cuts out for a good bit. Once settled in, this one becomes a real joy to listen to.

The set list is pretty standard for this lick of the tour. I definitely like where this particular set list is going. "Snail Shell" and "Working Undercover for the Man" are excellent staples of this show, and "Mammel" makes a slightly rare appearance. The new intro of Istanbul is unrecognizable and very exciting. The new version of Particle Man is very enjoyable, as the long and very tedious accordion jam has been replaced with a quick interlude. The band seems very together and there are no major flubs that I can remember.

At first, I thought that I had made a mistake in buying this show. The beginning of the set is a bit rocky, but once things settle in this show becomes a very fun one to listen into. For ten bucks, it's not a bad deal.

Beautiful day - and this is important because for the first time this summer we can walk outside without radiation suits. I think my liver got tanned this week.

I love the Penn's landing gig, I love any gig by the water and this one is especially fine. For those that have never been it a concrete amphitheater facing the river, the stage framed by all the waterfront activity of Camden, NJ. If you look across the river you can see minor league baseball, the building of snazzy apartments and another festival taking place at the exact same time as ours! This is not the first time that this has happened. Some promoter or radio station gets into it with the venue and decides to hold a competing festival in an attempt to drive the other out of business. Who does this suck for? You and Me!! The summer is long people, why do you have to plan events specifically to clash with each other? Instead of making the bands and fans fight it out, have a moment of civility and split the days. The better for the fans to get to see a bunch of great bands instead of having to pick sides in a fight they could care less about. Considering the state of the business it seems suicidal to behave in such a way. The bands lose with lower turnout. The fans lose by missing some great shows. It hard to image how the promoters and other such people win, but maybe they do. I have no idea, I just know that whenever I've seen this situation it seems really petty.

The band handed out about 2,000 free orange hands for this gig. From the stage it looked tremendous as they were waved during Fingertips. A slightly shorter set then normal, but a fine selection of tunes from all over the TMBG map. Good quality recording, as the stage mics were high enough to avoid most, but not all, of the chitchat. I'll post a sample soon so you can check it out.

We're off the road for bit as the August shows have been postponed... I think till October. Thanks everyone, a fine couple of weeks and I wish it was longer. See you in the fall! Oh Yeah... the new OKGO album is coming out in August... please support these TMBG buddies. Pick up the disc and go see a show. A finer group of minstrels parading for your entertainment will be hard to find.

Foam hands were given out by Flans before the concert. I think I saw on here that they were only giving them to about the first 200 or something but there were way more people and everyone had them ,and at the end Flansburgh said, "There are still a gilian foam hands, we now put the limit from one hand per face to one hand per hand."

Istanbul (Not Constantinople) was a kind of electronica and latinish version.

Before Particle Man Linnell talked about in the middle he would do a song called "Squint" and he did. Does anyone know if he's done this before? It may have just been because he kept saying the sun was shining in his eyes and he was sqinting so he made it up on the spot.

2 Intros that I don't know when Flans said them. 1. He started on the S-E-X-X-Y Intro (You Know It) but then he goes in to another song (That what I forget!) , and 2. After some song Flans talks about a man who was on a cell phone during most of the song, "The Rock Show Kind Of Way".