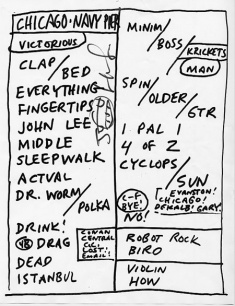 We were looking forward to our second TMBG show this summer, as we also recently saw the DC Sessions show (which was great).

We Arrived at Navy Pier early to look around at all the tourist attractions and even took in an awesome 3-D IMAX movie about the space station.

After eating at the food court we walked on over to tthe Skyline Stage and took our front row seats. It wasn't long before Gregory Douglass (two guys) came on and did five or six songs. They had a good sound and were entertaining enough without taking our attention from the main course to come. After they stopped, the crowd began to anticipate the arrival of TMBG and the seats started filling up. A crazy girl started dancing wildly to the music that was being piped over the PA system. Soon a guy joined her and they even put the spotlight on them. They were dancing in front of the stage and on the security guy's chair. The crowd was loving it and laughing and clapping. I saw somebody from the TMBG dressing room stick their head out to see what was going on.

The roadies were taping the set lists to the floor by where the guys would be playing. Anicipation was building. From off-stage, Flansburgh did the victorious intro and told everybody to come up to the stage. Oh well, so much for our front row seats, but we still had a good position at the front. They started off with Clap Your Hands and this was a very good way to start as it got the crowd clapping and jumping. Then they went into Bed Bed Bed and shot off the confetti cannon. This was a good indication that there would be no James K. Polk tonight.

I really especially enjoyed Dr Worm, a great version of Drink and we were surprised but happy to hear Dead. Linnell seemed in a very good and happy mood, talking to the crowd and smiling. They Did Spin the Dial and werent having much luck till they came up with an old Black Sabbath song (not Paranoid), but it was fun.

When they did Why Does the Sun Shine the mentioned local places like DeKalb and Evanston and then the Johns were joknig about different kinds of cars that would turn into a gas if they were on the Sun. They seemed to be in a pretty happy mood.

They came on to do their first encore which included Birdhouse and ended the show with How Can I Sing Like a Girl.

We hung around by the front of the stage at the end and Danny Weinkauf autographed our ticket stubs. We had a great time and are looking forward to the next one.