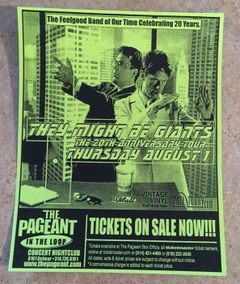 Review by Mike and Ana:
Somewhere in here they played Mammal I think it was after On the Drag but I'm not sure...

This show was rocking from beginning to last. First of all we went down to the Loop early so we could go shopping and try to see some of the band and we did we spotted Dan Miller and Danny Weinkauf at Streetside Records and John Linnell walking. My boyfriend Mike pointed out that Linnell was walking very strangely, kinda all loopy like he hurt himself. I said he looked like he was drunk. We waited a long time to see the show. Gregory Douglas was an so so opener. They had a Dave Matthews feel to them. But the whole audience was bored out of their minds. It seemed to take forever for Giants to take the stage. And to make matters worse they played crappy music while we were waiting for them. Finally TMBG took the stage and started w/ Clap Your Hands. Mike and I both picked the opener correct. The energy was so great during the entire show. John Linnell was jumping up and down and talking up a storm. My boyfriend who has been to 5 TMBG shows before said this was the most alive and active he's ever seen him. Which makes me further wonder if he was drunk. The last show I was at he looked like he was asleep. I noticed that the children's songs weren't that great of show pleasers. I definitely liked the older songs better so did the crowd. Dan Hickey was rocking on the Dial a Drum Solo on "She's Actual Size" I especially liked when he did Animal from the Muppets. Flans also made the comment that they St. Louis is their favorite city after New York. Only because they don't really like any where else. Spin the Dial was so so they couldn't find any music besides country and classical. I was so proud when Flansburgh was tuning his guitar and strumed one chord and I said that it sounded like "the Guitar" and it was. Flansburgh let people in the audience play his guitar on the song. We both got to. It was great and after the song he pointed to a guy next to us and said you messed up my guitar. "The Guitar" was rocking except for the fact that I didn't get to hear a good bass solo from Danny Weinkauf. He hit a few notes and they went straight to Dan Miller. We talked w/ him after the show about it and he said that he was robbed. After the show he and Dan Miller were joking about it and Dan said that they saved his butt by stepping in. They crowd started a lot of Conga lines and a bunch of people got in front of us. One of which was totally going crazy everywhere and hitting me and these 2 girls next to us and he gradded another girls butt. So we missed Statue, 4 of 2, and most of Cyclops Rock til he left. Other than that the show went great. John Linnell's vocals were excellent on Violin. Everyone was singing along. And Dan Miller had a great solo on Istanbul. He kept making these really funny faces. Afterwards we got to meet Flans, Dan Miller, and Danny Weinkauf. I don't think Flansburgh liked me a lot b/c I told him this show was a lot better than the last one I saw. But he thought I said the last one I saw was a lot better. And he basically told me Screw You. But we found out what Giants are planning to play on Conan. Clap Your Hands and NO!. Over all it was a great show due to the atmosphere. Although we wished they played more Mink Car. The best Tmbg show yet that we've seen -Mike and Ana

Review by Adam:
This was my first show, and I absolutely loved it. For a nerd rock group, they rocked HARD. I love TMBG's music, and this show made me love them even more.

Flansburgh was all over the stage and full of one liners. "We love this place, The pageant... I'm sorry, I don't mean to get all sentimental on your ass." Right before Why Does The Sun Shine he yells, "We want you to want THE SUN!!!" After John Lee Supertaster, he let us know "Supertasting is real... look it up... on the Google." Before Dr. Worm, "Look, I've heard a rumor that St. Louis loves the Worm. People go home upset if you don't play the Worm Song..." Introducing In The Middle "This song goes out to you people who plan on drinking during the show..."

The setlist was absolutely fantastic. Fingertips for crying out loud! Fingertips! Dead was phenominal. It also shocked the hell out of me when they played Minimum Wage and The Famous Polka.

The highest energy point for the crowd had to be during The Guitar when a huge conga line and crowd surfing erupted.

To me, a TMBG show is a parody of other concerts. The lighters and swaying for Drink!, the mosh pits during On the Drag, the the devil-sign, arm-pumping during Everything Right is Wrong Again. It's a total blast and I will definitely catch these guys again. The fans are great and the band is great.

Yet another great show, lots of fun for those of us who went down to the floor. If you've seen "Gigantic," a lot of the performance footage on that DVD reminded me of this show. The confetti cannons, which I thought they shot off during "James K. Polk," were great fun.