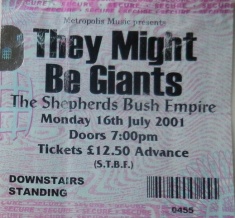 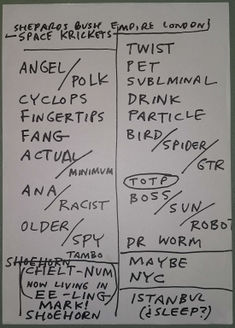 The only specifics I remember about this show, apart from the fact that it was a great show and my first TMBG concert, is that the stage lights didn't work during Pet Name. This was pretty exciting, it was like being in the same room as them rather than watching a show on a stage. If that makes sense.

I have just returned from a gig at the Shepherds Bush Empire, London, where the Brooklyn Ambassadors of Love, They Might Be Giants, whipped a crowd of 2,000 sweaty people into a love frenzy of quite extraordinary proportions. TMBG haven't been to the UK for a few years now, they are here this time to promote the new single Boss of Me (released July 16th) the theme from the BBC2 sitcom Malcolm in the Middle. They also have a new album Mink Car out in the Autumn, so plenty of scope for new material.
Firstly, the support band - Cousteau , a laid bag melodic rock outfit with fine musical talents who did not overstay their welcome. The keyboard player impressed all us non-dextrous onlookers by playing the trumpet and keyboards simultaneously, and they wore nice smart suits too. Since the sell-out crowd were ALL there to see TMBG, its a difficult act to precede, but Cousteau's laconic lead vocalist with easy tamourines and maracas admidst standard drum.guitar.keyboard provided a good leading filler to the main event. John and John entered stage left to wails of deranged delight from the audience, followed by the rest of the TMBG line-up (some other guys who remane nameless in my purist devotion for the original twosome, the holy duality John Linnell on keyboard/accordion and John Flansburgh -guitar). Confetti cannons were brought into play early on and fired into the crowd at the end of the second song, and the magic of music at last transcended the mortal boundaries of vibration and soared onto an entirely new dimensional plain where everyone smiles, your ears bleed and screaming is the accepted form of communication.
They started with She's an Angel, an old track and a firm fan favourite ("I met someone at the dog show / She was holding my left arm / But everyone was acting normal / So I tried to look nonchalant") and set the tone for the rest of the show by not plugging the new stuff too much, (the only new stuff was- Cyclops Rock, Drink, Older, Boss of Me, and one more I can't remember in my post-concert fatigue and euphoria) but doing crowd pleasing gems like Don't Lets Start, , Ana Ng and, of course, Birdhouse in Your Soul. Worth special mention is the attempt (and success) of playing Fingertips Symphony, a track that is a collection of numerous short song-ettes that was never really meant to be played live, but worked marvellously.
The glockenspiel was used to great effect on "Shoehorn with Teeth", which was also played in reverse, as it should be. The crowd, despite frensied pogoing throughout, were the finest bunch of obsessives you'll ever stumble upon and you could smell the love in the air.
They covered Dylans "Tambourine Man" to great effect, with a falsetto moment and a funky beat, the bemused crowd sang along anyway. The whole thing was witty, surprising, musically accomplished and still managed to rock. Memories of the punk 70's stood side by side with performance art standard weirdness, football chants from the audience and banter from the Johns. The band was introduced one by one in mad fashion, the drummer being identified as "a human cyborg with a thirst for human skin", moment after moment of pure joy.
Two encores later, the unfortunate 11'o clock venue curfew brought an evening of audio liquid purity to an end with "New York City" a feelgood finale of epic proportions.
So, a concert so filled with goodness you could wrap it up in stale bread and feed a small country with it. Go buy the single right now and you may see TMBG on TOTP this week.
Ooooh and name dropping - Jonathan Ross and his missus, Neil Gaiman and Suggs were there too.

I can't really follow Raybid as he's done such a great job. It was a good night. A friend of mines sister is married to the drummer of Cousteau so that was vaguely interesting but we were there for the Giants. John Linnell looked really up for it and played the best version of She's an Angel that i've ever heard. Flans did a pretty straight version of Hey Mr Tambourine Man, which initially we thought was a joke but then we realised he was doing is straight and it was good. More Byrds than Dylan! As ever with post Flood set lists there are a few hit and miss ones. I find Spy, Drink hardwork (so middle of the road!) and I wish Flans would sing his best material likewise does anyone really like I've Got a Fang? It's nit-picking but with the early Giants gigs I loved all the tracks. Still a great night.

This was a really great show in a great venue. My enduring memory is the banter surrounding their single 'Boss of Me'. It was being released the following week, and Flans said that if everybody in this room bought it, it would change their life. Everybody cheered. Then he added that they had just filmed a performance of the song for 'Top Of The Pops' (a long-running chart-music show on BBC) but it would not be shown unless the song charted. Everybody booed. Flans quipped "now I know you're not booing yourselves". And it seems the pep-talk worked, because the song did enter the chart at number 21 and they did appear on Top Of The Pops! The other thing I find amusing is that around this time Flans would sing an improvisational introduction to whichever crew-member brought the glockenspiel to the stage, sometimes describing them as a 'glockenspiel technician'. On this occasion, it must have been someone from the venue (Mark) and you can see on the setlist that Flans wrote the names of his British hometowns phonetically so he knew how to pronounce them (Cheltenham as 'CHELT-NUM', and Ealing as 'EE-LING'). --astralbee (talk) 04:48, 7 July 2020 (EDT)