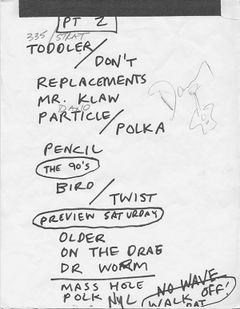 Review by: Karen J. Riley
Wow..all I can think of to say is "Wow." Tonight was the best show I've ever seen by TMBG -- and with a great opening act to boot, an amazing night. John Linnell was giddy as a school boy when he walked out onto the stage to play their first set, composed of their earlier material, saying later on that he "felt like a kid again." The second Flans walked up to the mike, he said that it seemed like he'd "just stepped into a freaky time machine" and suddenly "felt thinner." It was just the two of them alone, and I had never seen them perform like this before, so this was a special treat for me. The second set started off containing some earlier material as well, then finished with more recent material. Danny Weinkauf has shaved off his mustache and goatee. The Candy Butchers opened, and I do believe they've gained a new fan in me. They have this wonderful early-Beatlesque mod look, and they're just a very talented band that play great music...period. Mike Viola's a real charmer on stage -- love his voice. Mike Viola sang a short sweet song (I believe for Danny Weinkauf and his wife, on the birth of their new baby?) that went "Congratulations on having your baby," or something to that effect. One of the TMBG list members was invited to come up and sing backup with Mike Viola...(Hi Shana! -- she was great, and told her that myself after the show)

TMBG's First Set (Just John F. on guitar, and John L. on accordion [exception being "I'll Take Manhattan," see below] for the whole set, drum machine in the center of the stage)

Toddler Hiway (just Flans singing it into the mike, no music) Don't Let's Start We're The Replacements (first time I've heard this live, fun to hear in concert!) Mr. Klaw Particle Man The Famous Polka (with super-fast guitar at end -- Flans had from the "head" of the song to the end replayed super fast again, to see if he made a mistake -- he said afterward that he had indeed erred somehow) Pencil Rain (very powerful accordion/full band version...the full band adds a lot to this song!) This is where Flans said "that's all the 80's material we have planned for tonight, folks -- now back to our "regularly scheduled programming"...Linnell back on keyboards. Twisting (what is it about this song being played live that fills me with such complete and utter glee?) Older (oh this was interesting...they are starting to play a bit with this song, I see...Flans was going slower and slower still on his guitar, then playing at the regular slow pace, then slowing down to almost a snail's pace for the intro part of the song, then during the rest of the song, Flans and the Dans were freeze-framing their bodies on the stage in cool poses each time the song comes to it's pauses. It was a wonderful effect..I hope they continue to do this sort of thing with this song in future performances. On The Drag (Flans fuck-up #2, complete with irking heckler..Heckling Dude: "That's the second mistake you made!" Flans face says that he's heard the above comment. Heckling Dude: "You're something else!" Flans now looks at the man with steely resolve. Flans: "Oh yeah, well you just try to come up here and do this..." The man said nothing after this, probably thinking that he wasn't ready to make his musical debut yet :-) I love this song live!...again, first time I've heard it played in concert...very powerful piece. They said it would be on their next album. Finished With Lies (this is my favorite Linnell song in concert -- it has such a hypnotizing effect...Lin on accordion, his mike dropped a bit while he was in mid-song, causing him to pause and laugh for a sec, having to bend a bit to the mike in finishing the song) Dr. Worm (Lin improv on the lyrics with this one tonight -- singing short "ah ah ahs," then one flowing "ahhhhh"...the whole band really wailed on the ending)

Full band jam, with Flans breaking his guitar strings in between (musical introductions of the band members mixed in as well) James K. Polk (ending in whole band bowing down to audience at end) New York City (great finale-style ending)

Review by: John J. Ryan
Thursday was probably the best TMBG show I have ever attended. The special night began with the Candy Butchers. Shana, the girl who writes wonderful concert reports, was standing next to me for the show. She was wearing a suit as was lead singer Mike Viola. For the last song, Viola yelled, "You! You're wearing a suit! Come on up here!!!" And she did!

For the last drum fill, Shana was allowed behind the drum risor to do her best Dan Hickey impersonation.

After the Candy Butchers, They Might Be Giants came out, but it just the Johns and their first drummer, a big gray box. Later on during their full band set, they jokingly thanked They Might Be Giants for letting them open up for them. Their first set with just the two Johns and the drum machine was wonderful. We all got to hear songs we haven't heard since the last "old school" show. Songs like Cowtown, Mr. Me, 32 Footsteps, Nothing's Gonna Change My Clothes, and other stuff from the "THEN..." 2-CD set. We also got to hear normal songs from their set done in the "old school" fashion, like She's An Angel, Ana Ng, and Shoehorn With Teeth, still featuring Dan Hickey on the glockenspiel.

They also performed Istanbul, and explaining why they didn't to cover that song originally done my the Four Lads. They explained that after performing many 20-minute shows in New York City, they finally played a club in Virginia, where they were asked to play for two hours. They didn't have two hours worth of material, so they had to do what they could quickly, so they came up with playing Istanbul, a two chord song. Ironically, what started as a filler song became their most famous song. I have seen this happen too often with bands, when the song they really DIDN'T think would be a big hit becomes their big hit.

There was a screw-up with Maybe I Know as Flans and Linnell got the verses switched. They solved the problem by doing a shortened version of the song, called, "Deep Down Inside She Loves Me."

And of course, the mandatory confetti shot for James K. Polk. They fooled everyone tonight by launching the cannon after the 2nd verse instead of the 1st. The beginning of the full set consisted of songs also from the "THEN" set, including Don't Let's Start, We're The Replacements, Mr. Klaw, and a pleasant surprise, Pencil Rain (only time I've heard. Afterwards, the played some Flood stuff, including Letterbox. Then they continued with a couple of tunes previewing the Saturday show, On The Drag and Finished With Lies. Flans screwed up On The Drag big time, starting in the wrong key, which led a hckler to yell, "That's twice!". Flans told him off after that. Also Linnell's mic fell on him during Finished With Lies, forcing him to crane his neck for the rest of the song. But we were all too happy to care. We all walked away we the knowledge that this way the best TMBG show we've seen.