From This Might Be A Wiki
< Shows
2 wikians attended: Hyperfine Sinisterscrawl 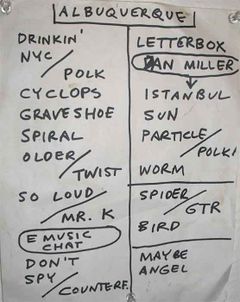 They Might Be Giants
Sunshine Theatre in Albuquerque, NM
September 22, 1999

Review by Austin:
Well, this was my first TMBG concert (although I've been listening to them for years), so I didn't know what to expect. I tried to get there early, but there was still a large line when I got there. But despite that, I still managed to get up front (right in front of Flansburgh) and see an excellent show.
The show started with drinking, which sounds great live. And then they played two Factory Showroom songs: New York City and James K. Polk. Then they played Cyclops Rock (the only song I didn't know the words to besides It's So Loud In Here.) Then they played Mr. Klaw, which was probably one of my favorite songs of the concert (and is also rare to hear live, apparently...) Don't Let's Start was another great song (and one of my favorite TMBG songs from any source.) Spy was next, and at the end Flansburgh acted as conductor using the audience's screaming, Dan Miller's guitar, Dan Hickey's drums, and Graham Maby's bass. Then they brought out puppets to sing Counterfeit Faker, with Dan Miller on acoustic guitar. This was my favorite song from the concert (I think it was a recording though, but I'm not sure.) They played Letterbox next, which was good too (all of the songs were good, even if they weren't ones I particularly like.) Then Dan Miller had a solo, which led into Istanbul (Not Constantinople), which I expected them to play. After this there was Why Does The Sun Shine? which I loved, and always sounds great live (well, from the bootlegs I've heard.) Then they did Particle Man, with the Godzilla Theme incorporated into it. I expected them to do something like this, because I had an mp3 of them playing the Sign during Particle Man. After this, there was The Famous Polka, but they didn't sing the lyrics. I was sort of looking forward to singing along to the lyrics. Then there was Dr. Worm, which I also liked a lot (but it wasn't better than Counterfeit Faker.)
The first Encore was spider which led into the guitar, and then they played Birdhouse In Your Soul after leaving the stage again. The second Encore was Maybe I Know (one of my favorite tmbg songs, even though it's a cover.) And She's An Angel, which is also one of my favorite TMBG songs.
Some of other highlights were when Flansburgh said that the album after the next will be available as an implant while preparing for Older. And it was funny when somebody jumped up on stage, and Linnell was thanking emusic and the like, and he said, "We'd like to thank that guy for getting off of the stage." It was also fun when Flansburgh let the audience play one of his guitars by holding it out into the audience. After that, they left and came back for an encore, and he had a different guitar, and a bunch of people began to bang and put their hands through the rail, so he would let them play this guitar too. Then Linnell said something about keeping animals in their cage, and I was just standing there, trying to ignore the people jumping around me, and Linnell looked at me. He understood.