They Might Be Giants
— with Lincoln opening —
Worcester Polytechnic Institute in Worcester, MA
December 13, 1997 at 8:00 PM 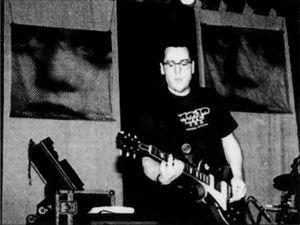 In an interview with Newspeak on January 13th, 1998, John Flansburgh was asked about what he thought of the Worchester Polytechnic Institute:

Sarah Walkowiak: What is your initial impression of WPI?
John Flansburgh: I've only been here for about five minutes. I drove up the driveway the directions were extremely clear, and, uh, it looks like a gym to me.

"Back by Popular Demand: They Might Be Giants" by Sarah Walkowiak
Newspeak: The Student Paper of Worcester Polytechnic Institute, Dec. 9, 1997:

After millions of years of waiting, well okay, four, They Might Be Giants are returning to perform at WPI on December 13 in Harrington Gyn (not Akdeb) at 8:00pm. They Might Be Giants last performed at WPI in 1993. Although they have become better known over the last few years, the band still has a cult following of fans, ranging from occasional listeners from obsessive fanatics. Their following at WPI is especially strong.


For those who are unfamiliar with their music, They Might Be Giants are not your average band. They are silly, sarcastic, cynical, and even occasionally sad all at the same time. Most of their earlier music was created with computers and synthesizers, although they have recorded their last two albums John Henry and Factory Showroom with a full band. They have experimented with a variety of musical styles, but most of their music sounds upbeat and brassy.

"They're a fun band... I think it's completely neat because I would never be able to see them otherwise." — Sarah Tranes
"They play cool and bizarre instruments, and they actually have intellectual lyrics to go behind them." — Drak
"They're quirky, they're original." — John Brosnan
"I'm really looking forward to seeing them live, my older sister saw them in Pittsburgh like a month ago, she said they were pretty good." — Andrea Sereny


"They're cool because they're unique. They were 'alternative' before it became a buzzword. They're just damn good." — Ian Parmenter

"WPI awed by They Might Be Giants" by Johnathan Tanner
Newspeak: The Student Paper of Worcester Polytechnic Institute, Jan. 13, 1998:

They Might Be Giants presented a stunning performance for the WPI campus community with their concert on the 13th of December. Having performed here once before a few years ago there was some doubt as to if their name would create enough interest on campus for a return invite, but with a huge turn out those fears were easily allayed.


The concert started with the opening act of "Lincoln" performing for about an hour. They had a decent sound and might be a band of note in their own right in another year or two. But, after an hour of hearing decent songs, but none of note, the audience was ready for Giants to take the stage.
Stalking out carrying their mic stands upside down the group broke into an almost impromptu sounding rendition of their classic "Spider". From there they went immediately into one of their most notable classics off their Flood album, "Build a Little Birdhouse in Your Soul."
With impressive stage lighting thought the evening the stage seemed to be continually alive with the environments and places. At the beginning of one of their songs they employed what the group called their "Live Confetti Cannon" which produced enough confetti in the air that danced around and maintained itself throughout the whole song so that you could believe that it was in fact alive.


At another point during the concert they had everyone who was on the concert floor for a giant conga line that continued the whole time they played. Watching from above it was very impressive to see the entire audience moving as a cohesive yet chaotic unit.
During "Particle Man" they went off into what they termed "a music eating virus" where they explored different sounding drum beats to where they eventually ended up with "Seinfeld" coming from the base guitarist.
The songs they performed included enough of the old classics that the fans who are familiar with their work, but they are also free styled on those throughout the night enough so even if you had heard the song 100 times before there was something new for you to experience that night. They also treated the audience to a couple of new songs that they've written, including "Mr. Worm."
They employed an unusually large staff that they would strike onto a sensor to produce the beat while they did an absolutely incredible rendition of "Lie Still Little Bottle". And, after consenting to an encore, they came back for a performance of possibly their greatest known hit "Istanbul (not Constantinople)".


They're a group that I hope we are able to bring back as often as possible for they created a show which people who were not familiar with their music could enjoy and those who know it had an absolutely great time.