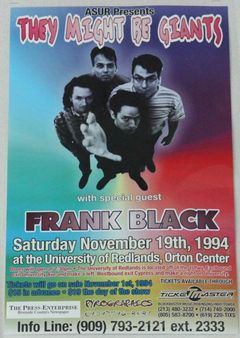 
The Vanishing Dot: this is taken directly from a set list that I own. I don't remember what some of these things are.

They Might Be Giants
— with Frank Black opening —
University of Redlands in Redlands, CA
November 19, 1994 at 7:15 PM

This was my first Giants show ever!!!!! Gotta be one of the best. But then again, I suppose the first times usually are. I don't remember everything, but there are a few things I do remember:

- Frank Black was the opener. Just him and an acoustic guitar... Or at least, at first. After every 2 or 3 songs, he would take his guitar, swing it around to his back, and put on another one. So by the end of his set, he was weraing like 6 or 7 different guitars around his torso. It was hilarious.

- They toured with horns. After all, how could you tour for "John Henry" without them?! Thus began my love affair of Giants shows with horns. These were the days when Linnell still brought his baritone sax on tour with them. He doesn't seem to do that too much anymore *sigh*.

- When they played "No One Knows My Plan", they got a conga line going that I swear included every last person at the show. Everyone just grabbed hips, and started to conga. I believe this has sort of become a tradition when they play this song? Anyways, to this day, that song is still one of my absolute favorites, thanks in part to the conga line.

- In addition to Steve Miller's "The Joker", they also at one point broke into a cover of Edgar Winter's "Frankenstein".

- As the passage of time further blurs and erodes my memories, the more I would kill to have a bootleg of this show. I have seen TMBG countless times since then, but this show still is one of the top 3!

Brocktune, thanks for your recap. It definitely brought back some memories. I didn't remember Frank Black wearing all of those guitars. And I too miss the horns!

I do remember the conga line, because I had been really close to the stage but foolishly got into the line and ended up at the back of the venue (Orton Center, for all you U of R alumni).

This was my second TMBG show. My friend Andy had a homemade foam hand with "TMBG #1 Fan" written on it, and Flans actually called on him at one point to ask what he had written on it. A couple of years ago, the band started selling similar ones. Coincidence? (My friend and I had also regaled the audience with a harmonized kazoo version of "Kiss Me, Son Of God" before the band came out.)

I met Tony Maimone afterward and he was very, very nice. His signature was the third to adorn my "Why Does The Sun Shine?" EP. (Flans and Brian Doherty had signed it back at my first show at The Troubadour, earlier in the year. Five years later, I'd get Linnell's.)

Several of us tried to meet the guys out in back. Eventually, the Johns came out, walking rather fast, with Flans giving us a quick wave and saying "thanks for coming out to the show everyone." Unfortunately, that's all we got, although my friend got two funny pictures of them behind the wheel. (I really wish he could find those.)

A year later, I ended up being a student at the U of R. I always wished They would come back and play another show, especially when I'd see the laminated TMBG and Frank Black posters in the ASUR office. But it was not to be.