From This Might Be A Wiki
< Shows
1 wikians attended: Kenr 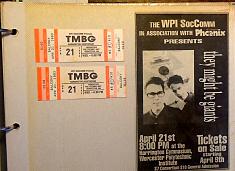 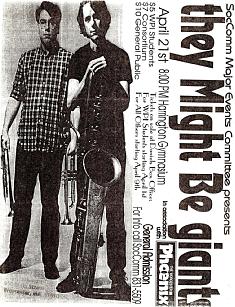 They Might Be Giants
Worcester Polytechnic Institute in Worcester, MA
April 21, 1993 at 8:00 PM

They Might Be Giants proved to be the crowning achievement of Quadfest '93 - a daylong celebration of student events and music held at Worcester Polytechnic Institute.

Playing before a pogoing, sun-scorched crowd of about 1,000 engineers in Harrington Auditorium, the quirky duo of John Linnell and John Flansburgh put their new material and line-up through the paces.
With full-blown accompaniment on stage, it's clear They Might Be Giants is trying to shake the quirky studio joke band tag that has obscured all the demented invention they pours into their numbers. Who can take seriously a lineup consisting of guitar and accordion?


Their 90-minute set careened through sloppy timing, off-key singing and arrangements that could have used an extra guitar. It'll take a bit longer to bring their studio polish to the stage, but technical issues are generally irrelevant when confronted with the musical and performance phenomenon of They Might Be Giants.