From This Might Be A Wiki
< Shows
1 wikians attended: Tilf

They Might Be Giants
— with The Ordinaires opening —
Town and Country in London, UK
June 17, 1990 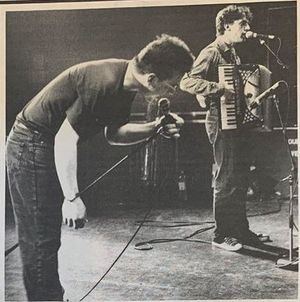 They Might Be Giants performing at the club. (Photo by Piers Allardyce)

WEIRD, isn't it? We're happy enough to accept dodgy sixth form poetry, egotistical rhyme and romantically utopian couplets as standard lyric fare, but we're surprised, even now, when someone comes across with what is real life, albeit real life wrapped in some rather surreal imagery.


They Might Be Giants are no fools, and while they may spend most of the time clowning about on stage it's because they know we know that deep down they're a pair of really intelligent geezers. And so most of tonight's gig is spent taking the piss, simply because, on one level, that is what is required of them.


They play funny instruments: complicated lengths of tuba-ing, two trumpets at a time, a big bass drum. A metronome, timekeeper of the eccentric, gives a rather absent-mindedly stilted feel to the occasional song. Nonsensical ditties like "Particle Man" work in much the same way as a Gary Larson cartoon — we know it's meant to be funny, even if we're not quite sure what it means. And isn't that, in a rather surreal nutshell, what real life is all about?
Don't we all hate our bosses (cheer!), despise people who move our chair (yes!) and really just want a prosthetic forehead on our real head (erm...eh?). I know I do.


But back in the unreal world of pop music, They Might Be Giants' distinct ordinariness is fitting in wonderfully. People with speccy glasses stand tall and proud, pogoing like they've never done before. Small children clap irritatingly out of time, the myopic one bounds around the stage like a wind-up toy in Willy Wonka's chocolate factory. The two Johns seem nervous, but their love for that big band music hall sound sees them through.
The nation takes it all to heart because they're sick of soppy love songs. They want that nine-to-five distortion to be given free rein, and, in a mad rush to appreciate their lives more fully, have gone and bought up the entire TMBG's back catalogue.


Of course, the fact this time last year they were probably grooving out to The Fat Boys makes absolutely no difference. After all, Messers Flansburgh and Linnell were probably down there among them. That's real life for you.


They Might Be Giants — can't with with them, can't shoot them. Love 'em to death.