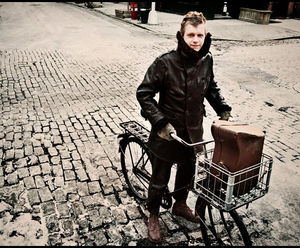 Erik Sanko is a marionette maker and avant-garde musician from New York City. He joined The Lounge Lizards and stayed with them for 16 years. His reputation landed him roles with such fellow artists as John Cale, Yoko Ono, Jim Carroll, and eventually led him to start the band Skeleton Key with Chris Maxwell in 1994.

Sanko was the bass player on Hello The Band's only release, a Hello Recording Club EP. He also toured with They Might Be Giants in the 1990s and was enlisted by the band to play bass on the studio recordings of "25 O'Clock" and "Doctor Worm". He also played fretless bass on Mono Puff's recording of Don't I Have The Right?.