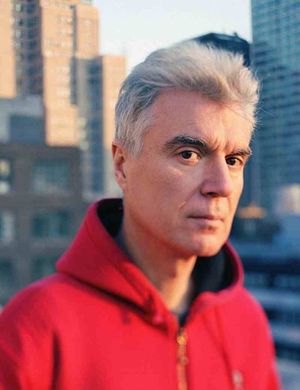 David Byrne is a musician, best known as having been a founding member and primary songwriter of the art-punk/New Wave band Talking Heads. John Flansburgh has spoken highly of the band, and in particular their third album, Fear of Music. The final track from Fear of Music, "Drugs", was included on a playlist the Johns put together for the AV Club.

Since Talking Heads' breakup, Byrne has generated an extensive catalog of solo material and collaborative efforts with other artist, including Brian Eno, Fatboy Slim, and St. Vincent. In 2004, he released the solo album Grown Backwards, which featured John Linnell on accordion. Byrne also contributed a track to John Flansburgh's 2004 project, the Future Soundtrack For America. In the same year, he appeared as a guest on an early episode of Flansburgh's Now Hear This radio show.

Many TMBG collaborators have also collaborated with David Byrne. He frequently works with Pat Dillett and Mauro Refosco, and has also done work with Marcus Rojas, Jon Altschuler, and Stan Harrison. A Hello newsletter asks us to recall the similarity between his Uh-Oh album and Lincoln — that similarity being that both had cover artwork by Brian Dewan. Byrne and Talking Heads tracks have also appeared alongside TMBG on some various artist compilations.