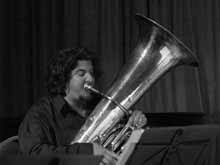 Marcus Rojas is a jazz musician who played the tuba for TMBG's Other Thing. He also teaches the tuba for New York University's Music and Performing Arts department, and was a member of the modern jazz band Plunge.

Rojas played the tuba for Spanish Fly, which released an EP through the Hello CD Of The Month Club. He has also collaborated with David Byrne, who had a solo album that John Linnell appeared on.