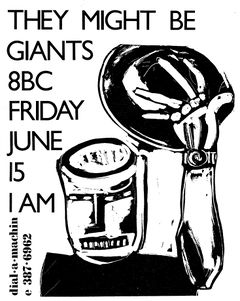 A poster from an 8BC gig in NYC. 8BC was an amazing venue (located quite logically between Avenues B and C on 8th Street) The stage was actually the first floor of the build while the audience looked up from the collapsed, cleared out baesement. It was really the East Village scene at it’s height–with three or four shows a night including some quite elaborate performance art spectacles. There was a rabbit that lived on the stage that would occasionally steal the show at what was usually the perfect moment. For a few years they had a summer pig roast festival where they buried and slow cooked a pig underground. That seemed a little scary.

This poster was something I made in my final year at Pratt – another monotype.