This show featured "The Tricerachops Horns," consisting of:

The HORNS were on stage for: Mr. Me, She's Actual Size, Withered Hope, Working Undercover For The Man, Metal Detector, In The Middle, Spy, Whistling In The Dark, bee Of The Bird Of The Mouth; Birdhouse In Your Soul; Museum Of Idiots, Ant, Doctor Worm; With The Dark, Istanbul (Not Constantinople).

Dug this show so much. Second TMBG concert - well worth it. I liked the improvement made to the Phone Calls from the Dead bit - the last time I'd seen it, I don't recall there being a musical intro (but there may have been, I'm bad at that sort of thing), and the little tiny projection screen on the otherwise large stage was cool, too; a great addition. Emily Dickinson (Flans off-stage) called the band and, after some pleasant chit-chat with Linnell ("You can tell you've been practicing, this show is much better than the last one"), she mentioned a new poem she had written, inspired by living under the cold ground.

"Hickory dickory dock.
The band ran up the clock.
They brought in some horns,
But still it was boring.
... f*** you guys."

The guys who run this wiki were pointed out by the band at one point, and jokes were made about how scary it is to have an incredibly detailed account of one's band available on the internet. Linnell mentioned that the best part would be reading about the part where they talked about the wiki. Hi, John!

The opening band - Oppenheimer - was quite good. I hadn't ever heard of them, but so what, they were great. Couldn't wait in line for their album, so I'll have to find it elsewhere.

Dave! The band now can look at this page, and the self-referential set will spiral out of control, crash the internet, then eat all of space time until everything everywhere is crushed into a singularity. Nice job of predicting that, TMBG, even if you just destroyed the universe. *waves goodbye* --Christina 18:55, 23 October 2007 (UTC) 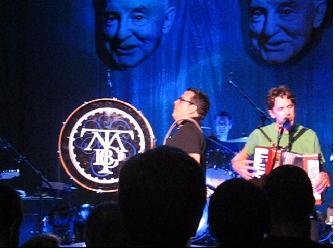 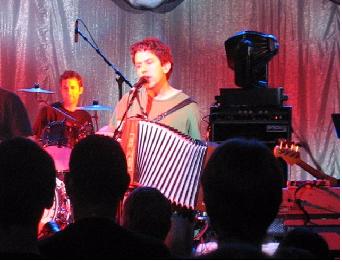 Link to video from the concert: http://youtube.com/watch?v=7Ff_WFKXHms

Great show. Here is a pic I took:

It was so great! This was my first TMBG concert (actually only my second concert ever) and i loved it. And I was sooo happy that Istanbul was played at the end. =]=]
My only criticism was the t-shirts sold at the end. I wish there was a bigger variety, and not quite so high a price!
And I was a little confused about the drunken man on the yellow one. =p