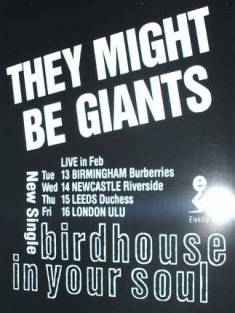 They Might Be Giants
Duchess of York in Leeds, UK
February 15, 1990

From an interview with the Halifax Courier in 2016:
Linnell said his favourite memory of the north was playing the Duchess of York in Leeds in the 1980s [sic]:

It was such a big crowd – a huge crowd for a tiny little pub and the sound guy was behind the mixing desk and he had to put his feet up against it because otherwise he would have been pinned to the wall by the mixing desk, the crush of the crowd was that big. That’s kind of a fond memory.