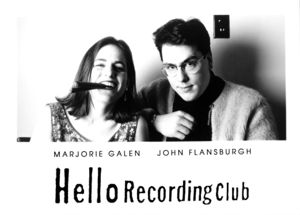 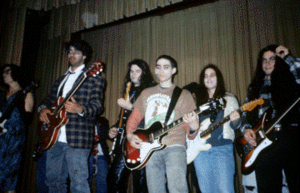 Rehearsing for the "Living Dead" scene in the video for "The Guitar". Galen is second from right.

Marjorie Galen co-founded the Hello CD Of The Month Club with John Flansburgh during a Japanese tour in 1992[1]. At this time, she was the manager for Freedy Johnston, a musician who opened for TMBG and recorded and released an EP through Hello. She was also married to TMBG's manager, Jamie Kitman, and had formerly worked for Bar/None Records.

Later on in her career, she tapped the Johns and Frank Black to contribute some music to the film Haiku Tunnel for which she was the musical director. "Snowball In Hell" is played during the end credits of the movie. Galen is also mentioned in the credits for Gigantic (A Tale Of Two Johns) alongside Jamie Kitman.