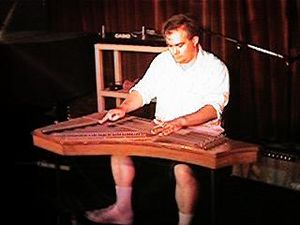 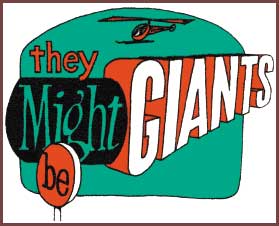 The front of Dewan's TMBG "Love Show" T-shirt (From store.yahoo.com) 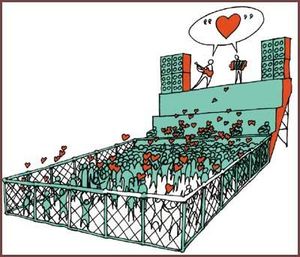 Brian Dewan has worked with They Might Be Giants on several occasions. He built the shrine that appears on the cover and liner notes of Lincoln, took the accordion photo in the Miscellaneous T liner notes, and built the blue keyboard stand John Linnell has used on tour. He also contributed art to several TMBG t-shirts and sang a couple of the "Fingertips" vignettes ("I Found A New Friend Underneath My Pillow" and "Who's Knocking On The Wall?"). Linnell once interviewed him on FX about the electronic zither that he built himself. Linnell and Dewan collaborated to write the song "The Edison Museum", with Linnell writing the music and Dewan writing the lyrics. Dewan and Linnell shared a house in the early 1990s, and some of Brian's artwork appears in the video for "The Guitar," which was partially filmed in that house. (He was going to appear in the "Living Dead" portion of the video but had to leave before filming began.) He has also opened for TMBG many times.

In 2002, Dewan narrated the story-album The 2nd Imaginary Symphony for Cloudmaking by The Music Tapes, an experimental band led by Julian Koster, who played singing saw on "James K. Polk." That same year, Dewan also provided narration for Mark Newgarden's "Cartoons and You" short, included in a DVD collection of cartoons called God Hates Cartoons. Tony Millionaire, longtime friend of Dewan, contributed four "Maakies" shorts to the same disc, which also features work by other TMBG collaborators, including Sam Henderson, who directed the animation for "Flying V," and Andy Richter, who narrated some of the Johns' venue songs sets and appeared on the documentary Gigantic.

Since 2004, Brian Dewan and his cousin Leon Dewan have built solid-state handmade electronic synthesizer instruments called "Dewanatrons". The devices are built to make noise on their own, and require "operators" to guide them rather than play them like traditional instruments.

In late 2008 Bright Red Rocket released a DVD of Brian Dewan's well-known filmstrips. He has made these handcrafted presentations since the 80s; each features original artwork, music, and narration by Dewan. Though they appear similar to the educational materials, Dewan's filmstrips are surreal, dark, and unsettling, combining elements of 1950s Utopian Futurism with irrational authoritarian intolerance and sly, subtle humor.