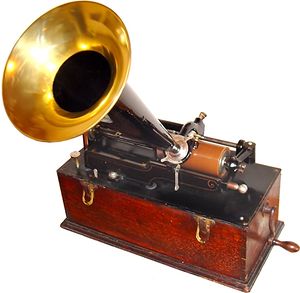 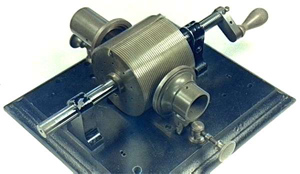 TMBG's wax cylinder recordings were created on an Edison Home Phonograph-type machine. Early phonographs from 1877 until 1888 were handcranked and used thick tinfoil as the recording medium, a medium unable to do more than crudely record speech. In 1888, Edison re-invented the phonograph, producing a vastly more sophisticated machine with an electric motor powered by a wet-cell. The cylinders were now made of hard wax, which could record more complex sounds than speech, such as music. The method of recording was still acoustic, however, with no electric microphones. By the 1890s, Edison's domestic machines, such as the Home Phonograph below right, were powered by spring motors.

Each recording is prefixed with an announcement of song title, artist, and the place of recording ("Made at the Edison Laboratories"). This follows the standard convention for recordings made on cylinders in the late 1800s and early 1900s.

As caretaker of Thomas Alva Edison's tangible legacy at his West Orange laboratory, the National Park Service regularly attempts to bring the static world of the past to life with demonstrations of Edison's greatest inventions. Special events dominate the Spring and Summer schedule at the Edison National Historic Site, and one of the most unique happenings of 1996 was held on April 27th when the popular modern rock group They Might Be Giants held a public wax cylinder recording session in Building #1. The connection between They Might Be Giants and the Edison NHS goes back several years, to when Brian Dewan and Giant John Linnell wrote The Edison Museum for WFMU-FM's Edisongs LP (1991). The room selected to hold the sessions occupies the middle of Building #1, one of four one-story brick buildings laid out perpendicularly to the main lab. In its day, Building #1 was Edison's Physics Lab, today it houses displays and offices. Guests for the three recording sessions gathered in the main lab entrance and were escorted through the courtyard to Building #1. Three rows of chairs were laid out in the stark white room, turned north overlooking the shaded lawn which narrowly separates the lab complex from Main Street.

The 12:30 session (the second of three held) began promptly as They Might Be Giants entered the room. The 1898 recording system and an accompanying playback machine bookended the simple wooden stage. TMBG leaders, John Linnell and John Flansburgh, were smartly attired in black and white while the band (including legendary Joe Jackson bassist Graham Maby) dressed in more casual apparel.

Singing directly into a huge horn (a precursor to the modern microphone), John Flansburgh lead the band through I Can Hear You. Next up, John Linnell sang James K. Polk. A strong tuba line punctuated the bottom end, highlighted by a tuba/vocal break in the middle. The band finished the session with a smooth version of The Edison Museum featuring vocals by "The Pride of the Oranges" (as John Flansburgh introduced him), WFMU's Nick Hill. After finishing each recording, the cylinder was taken over to a window ledge to cool. While waiting it to harden sufficiently for playback, the band, NPS staff and the audience enjoyed very informal question and answer sessions.

Due to the close proximity of the open windows in Building #1 to the sidewalk along Main Street, the sounds of the recording session caught the ear of unwary passersby. It was quite amusing to watch their faces as they heard the music of an all acoustic band drifting from behind the dark green window frames of the Edison lab grounds. It was if they had heard a ghost... and perhaps they had. For one afternoon, the best of the past and the present met, and together they produced some memorable music.

The engineer at the sessions, this guy Peter Dilg, who has a lot of wax cylinder recording stuff, he actually owned the recorder that they made [the recordings] on, because nothing in the museum can actually be used, because they don't want it to be degraded by use, so he brought in his own collection of wax cylinder recorders and we used his equipment. He's got one that actually has jacks coming out of it that he plugged into a DAT (digital audio tape) machine, so it's completely straight out of the 19th century directly into the tail end of the 20th.