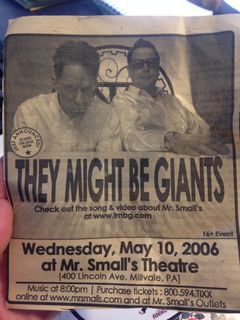 This was my wife's first real concert. we're both kind of shut-ins. ANYWAYS. i remember there being some 40 year old TMBG fans walking around outside the show with a sign that they wanted everyone to autograph "for the Johns." Mr. Smalls... i hate that place, and going to any show at that place pains me. partially because of it's location, and partially because i'm just an old crank. it's a skatepark, or used to be a skatepark... that's a venue also. that didn't stop us from enjoying the show. The Bird of the Moth of the Bee was the highlight. Flans was funny as usual, and Linnell just looked uncomfortable the whole time. they seemed to be really tired from touring. they were still great. my wife kept throwing her sticker/business cards up on stage during the whole concert. she's a hopeless shill for herself!

This was the last concert I could attend before some grisly medical business, so I'm glad I could spend it with TMBG :-) Mr. Smalls was slightly improved over last time, with the addition of air conditioning and an "over 21" section to comply with their new liquor license. Michael Leviton, and I'm not ashamed to say this, was AWFUL, and if I was over 21, I would've made a drinking game out of everytime he sang a lyric about water! But I wasn't there to see him - I was there to see TMBG, and they rocked as always!! Not too sure about the new material yet (the song about packing was decent), but it was great to hear songs like "Number Three" and "We Want A Rock." Flans' banter was hilarious as always - the Bush administration became a gas on the sun, and he also memorably replied to someone's middle finger. :-) I gotta admit, I didn't like not doing the Wave, but that's just a small gripe in a very, very solid TMBG show!

My fiancee and I drove the 2:15 from Cleveland to see this show on a weekday, which is still a debateable idea, but it might have been worth it. I really wanted to go because Mr. Smalls looked like such a cool venue from the pictures on their website. It's still a neat venue, but I had some complaints about the place. I stood in the very back of the room, against the sound board partition, because my fiancee is 5'1" and I couldn't find anywhere else to stand where she could see. She's not really a big fan of TMBG and she has to get up at 6 every morning because she's a high school teacher, so I felt it was important for her to at least be able to see. My location might have had something to do with my complaints. I had alot of trouble picking out the different instruments from the mix, which is something that's important to me. I like hearing all of the different parts. I could only hear about one distinct instrument at a time, plus the drums and the lead vocal. Anything that wasn't a lead instrument or vocal was completely lost to me. I like a lot of the backing vocals and I like the bass, so that kind of sucked. Everything I could hear was great, but I've never had a worse experience soundwise. It was ridiculously hot where we were standing, and tall people kept standing right in front of us, which I've never had a problem with before. There were also 4 extremely drunk people at the beginning of the show, who acted like complete morons. Two of them were, from what I could tell, escorted out by the police, so that was nice. I don't recall this many morons being at other shows, but it could be a case of selective memory. One of them did say something that I found really funny. After Meet James Ensor, he shouted "Meet James Ensor, bitch!" Ah, alcohol... I have to say that although I *completely* couldn't hear Michael Leviton, aside from his banter, I didn't think he was all that bad. A few laughs, decent songs, and a short, polite set. All in all, I would say this was a great show, but I wish I could have heard and seen it better.