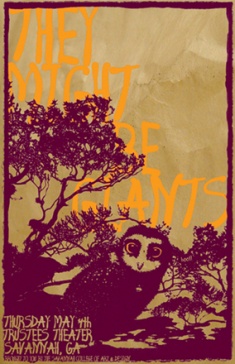 Jbullins:
Sponsored by the Savannah College of Art and Design, this show was split into two parts. The first segment featured only the Venue Songs, and was presented as they are on the DVD, with introductions for each song. Linnell stood at a podium, which he had some fun with after realizing it was mechanized and would go up and down with the touch of a button. Audience members were asked to remain in their seats during the presentation.

The second part of the concert was the "rock show" where the audience was encouraged to get out of their seats and come down front in order to get down (perhaps with their bad selves). While I did not write down the setlist, the second half contained mostly more well-known songs (i.e. Istanbul, Particle Man, Birdhouse, etc.).