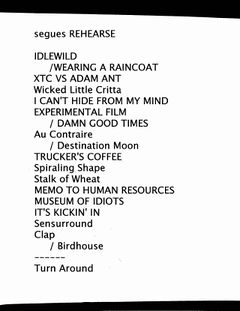 A Quarterly Report featuring mostly new and non-album tracks, some songs got their unveiling or first live perfromance. The accordion under JL's keyboard was only used for the first song. The Indestructible Object EP was mentioned for a March or April release, featuring Au Contraire.

Trucker's Coffee - featuring psychedelic lighting, and an overcoat and coffee mug as props for Flans

It's Kickin' In - First performance! Just written a week ago. "It'll never be that good again" - Flans. A nice rocking song.