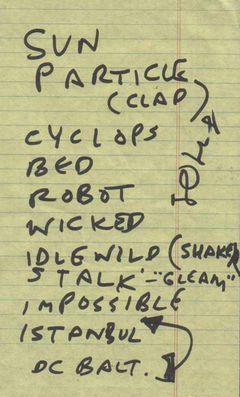 They Might Be Giants
Borders in Philadelphia, PA
November 14, 2003


Why Does the Sun Shine? - Flansburgh rattled off the longest list I've ever heard of things that are a gas on the sun. It seemed like he was trying to think of every item he has ever used in the segment. The nuclear reactions were between Cochehanken, King of Prussia, Main Line and Camden.

Particle Man - We were instructed to clap along for the entire song. Linnell used the stylophone.

Cyclops Rock - Flansburgh announced that it has become an instore tradition to perform this song in the style of Peter Noone of Herman's Hermits.

Bed Bed Bed - Flansburgh explained that They would play the fast version because all the oxygen had been sucked out of the room and he was afraid the slow version would put everyone to sleep.

Wicked Little Critta - This is the song I got to hear twice as it was played during the sound check.