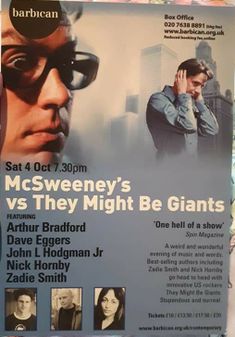 They Might Be Giants
Barbican in London, UK
October 4, 2003

An evening at the Barbican Centre [1], born from the collaboration between McSweeney's and They Might Be Giants following the publication of McSweeneys Volume 6 with accompanying, specially written and recorded TMBG CD. The event was partially staged as a political battle between literature and music, which it may or may not have been (but probably wasn't).

Authors Dave Eggers, Arthur Bradford, Zadie Smith and Nick Hornby read short stories (Zadie Smith's "Girl With Bangs" backed by TMBG), followed by an hour's set from the Johns and the Dans, including an appearance by Robin Goldie Goldwasser.

Arthur Bradford (author of "Dogwalker") smashed his acoustic guitar on the stage during the climactic point of his story about the muskrat. He very apologetically signed the chunk that hit me. What a lovely bloke.

The American authors put effort and performance into their readings, the two British authors were very flat and dull. ASL