From This Might Be A Wiki
< Shows
3 wikians attended: Aliste Bryce Psuabq 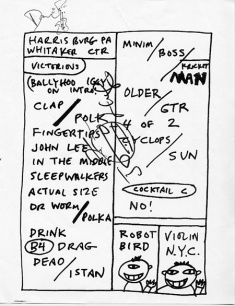 This is a great venue; it was very comfortable, and pretty intimate for a seated theater. The Johns commented on how they were used to playing in dives, and how they'd like to play in places like this more often. They also repeatedly thanked all the Whitaker Center staff for being nice to them all day.

The opening act was a solo "antifolk" guitarist from Philadelphia, named Adam Brodsky. He was hilarious! Clever songs impressively sung, and lots of good stage banter. I actually enjoyed his set more than any other opener I've ever seen. Catch him elsewhere if you can. Some of the songs he did can be found here.

TMBG's set was right in line with other recent shows. My favorites of the night were probably Robot Parade, Violin, On the Drag, and Supertaster. But then, everything was great, of course. :)

JF: "This song is new to our repertoire, but not new to anyone who knows our albums... it's, uh... actually what is this next song, John?"
JL: "This next song isn't really a song, but it's called Fingertips."

JF (guitarless): "I'm going to be doing this next song in the style of the musical legend Art Garfunkel. Not with of any kind of vocal impression, but I'm going to be keeping just my thumb in the pocket of my jeans, like this. You know, there's no training for this kind of thing, it's all on-the-job training. And Art Garfunkel, not being an instrumentalist, had to come up with his own thing to do, a way of presenting himself that allowed him to express his emotions."

Then, after they finish the song...

JF: "I couldn't keep it there for the full minute and a half."
JL: "I guess that's the difference between you and a true professional like Art Garfunkel."

Actual: I don't know, maybe I'm weird, but I kind of like the shitty shitty blues as told by the fake horns of Dan Miller's synth guitar. Hickey's multi-solo left me in awe as usual, but his Buddy Rich was especially mindblowing. Flans agreed; he responded with "Do that again." :)

Dead: Linnell didn't realize that he was supposed to be starting the song, and there was about eight seconds of complete silence. It was kind of creepy, the crowd wasn't even shouting requests. Linnell said "Are we having technical difficulties, or is this just the most relaxed show we've ever had?" I really enjoyed this song, it's gotten better each time I've seen it. Flans did more harmonizing than I remember him doing in previous performances (i.e. on the verses as well as the chorus).

Worm: Linnell introduced the song saying it was about a drummer friend of theirs from Sudbury. "He must have practiced this a million times... here, imagine I'm holding a drumstick. He'd go: *gssh*... twirl... catch... *gssh*... twirl... catch... *gssh*..." (The twirls were tosses into the air, not the kind of around-the-finger twirls that you sometimes see.)

Flans was without glasses for three or four songs (one of which was Doctor Worm, but I can't remember the others for sure). I didn't catch whether they fell off while he was bouncing around in a Red-Bull-fueled frenzy or if he took them off for some reason. I was surprised at how much older he looks without them.