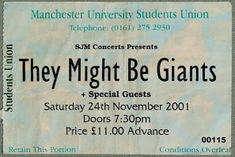 They Might Be Giants
Manchester University in Manchester, UK
November 24, 2001

John Linnell's baritone saxophone got stolen before the show

I also remember the crowd throwing drinks and getting Flansburgh wet. After that show, I doubt Manchester will be on their tour list again.

I'd seen the Giants few days previously in London and i traveled up to Manchester to see them again. Flans handed the pint throwing well, you play at a Uni and you are going to get a few idiots (Linnell look pissed though) and my two memories of the gig are this. One, it was loud, really loud and my ears rang like mad for the next 36 hours. The last gig I saw with the giants I actually wore earplugs to protect me from the sound! How old am I? My main memory of the gig was chatting to Flans after the gig as he came out and worked the crowd and signed stuff. Linnell stayed hidden. We had a brief chat about why there was an American and European version of Mink Car. Flans had no intention of telling me why and gave me a couple of minutes of blather. But it was polite blather so I could handle that. A guy my age I reckon I have a few musical heroes: Morrissey; Black Francis; Kim Deal and Lou Reed but I put the Giants at the top. One day the rest of the world will catch up and realise what an amazing band they've missed and it was great just to talk, very briefly to Flans. He's obviously a very nice man.