From This Might Be A Wiki
< Shows
5 wikians attended: Harringtonj85 I am a Sax Player Museumofidiots Sensurround29 TDK 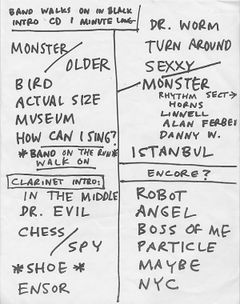 Review submitted by Mike:
I saw a great show last night at the John Harms Theater of Arts in Englewood, NJ. Except for the encore, the entire set was played with seven or eight piece horn arrangements by Dan "The Machine" Levine. Unfortunately, I didn't get to take any photos but I'll be sure to get some good ones in Brooklyn next week! Here's the set that was played: [see setlist above.]

Wake Up Call - Played over the house system as the band of Dans and the horns came on stage.

Monster - The Dans and the horns played the Johns onto the stange with this reworked Malcolm in the Middle instrumental. They also played it later in the show as John F. introduced the band to us.

Museum of Idiots - A brand new Linnell song which he said was written specifically for the horns.

Don't Cross the Street - The song that TMBG was looking for to cover for the No! album, there was a request for help finding it on theymightbegiants.com. Sung by Mrs. Robin Goldwasser.