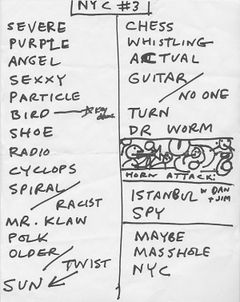 Review by Karen J. Riley:
I got to take a lot of notes tonight, because tonight was the first time I was able to get a good table in the balcony, stage side Flans, which Barry and I shared with a really nice guy named John (no, not either of those Johns). I got in line really early tonight, and hung out talking with Jordan (HallofEyes), Amanda (PookieLuck), JJR (John), TDK Mike, a young couple from Boston, and I met the Rev. Kristina Panos and her male companion after the show (hi you guys!) Shana was also there, showing us some pics of Wednesday's show. Tom Brislin, lead singer of You Were Spiraling came over to talk to us for a while (he's a really nice guy!) We saw Flans run down from the venue's front door to his car that was parked around the corner a few times...the last time bringing his Crown Vic in front of the venue, packing something into the trunk (my husband thought maybe it was the drum machine?), then taking off down busy Delancey St. (the street the venue is on). Mrs. Linnell walked through the front door, and later came out with John L...they walked quickly past the line of fans, being Linnellian, trying their best to pretend we weren't there...they walked down to the corner (maybe to get coffee or a bite to eat?), only to be cornered by a fan asking questions...from what we could see, he was answering this person before he and his wife crossed the street. During the concerts, Dan Hickey and Dan Miller were hanging out on the Linnell side of the balcony during certain parts of the evening.

Anyway, on with the program:

You Were Spiraling: I've got to tell you people...this band is getting better and better...I think they've been fine-tuning things in the group while they were on tour with TMBG. Sylvia (the violinist) was not with them tonight. This band put on a show tonight that tells me they are finally ready for a record contract. You record companies out there...this should be the next band you think about signing! Besides their own songs, their covers of "Will You Love Me Tomorrow?" and the one that shook the rafters at the end of their set: their version of aha's "Take On Me" (Mr. Brislin carried that song's difficult vocal ranges with amazing accuracy), earned the band a foot-stomping demand for "one more song!" There wasn't time for that in the schedule, though, and off they went.

TMBG: Flans shocked the hell out of me tonight, because when the lights went up, he was wearing a suit and tie! (The suit was tan, in case you're wondering)..Linnell said " *Now* we're a full band...as though we weren't crowded enough on stage as it was." Severe Tire Damage Theme, by The Velcro Horns, which now is a trio: sax-player Stan Harrison, Dan Levine on trombone and euphonium (like a small tuba), and Jim O'Connor on trumpet Purple Toupee (yay!..full band, with Lin on keyboards, Dan Levine on euphonium) She's An Angel (full band, with Lin on accordion) S-E-X-X-Y (yay again!...I knew this song would sound great tonight, and I wasn't disappointed...Lin on keyboards) Someone at this point shouted for the band to play a certain something, and Linnell said "Wait for it!...Wait for it!" It sounded just like the way Graham Chapman's military general character in Monty Python says those lines. Particle Man (the full band tonight gave this song a beautifully refreshing boost, with Dan Levine on the euphonium, Jim O'Connor on trumpet, Lin on keyboards) Shoehorn With Teeth (I loved this version of it...Dan Hickey on the glockenspiel, Dan Levine on euphonium [which sounded fantastic on this song, I might add], Stan Harrison on sax, Jim O'Connor on trumpet...the crowd was going bananas) Radio They Might Be Giants, Version One (no horns, full song, Lin on keyboards) Radio They Might Be Giants, Version Two (same setup as above, but a slow, "Charlie Rich" country ballad version -- loved it!! Before they played it, Flans told Dan Hickey he was playing too fast, and stated in a half-joking manner: "Dan, you're always ready to rock...play it slower!") Cyclops Rock (no horns, Lin on keyboards, good rockin' version of this tonight!) Spiraling Shape (no horns, Lin on keyboards), which went right into -->>> Your Racist Friend (no horns for most of the song, but included a Jim O'Connor trumpet solo) Mr. Claw (no horns, seemed like an especially creepy version of this tonight, Lin on keyboards) James K. Polk (no horns, Lin on keyboards, with band bowing together toward the audience at the end...since I was sitting in the balcony tonight (first time I ever sat in the balcony for a TMBG show), I got to watch all the folks below get showered with confetti, as the lights were turned completely on...that was a LOT of fun to watch)

Older (Lin on keyboards, same speed changes with the guitar as in yesterday's show, Lin sounded like he was scolding the audience as he sang "you're older than you've ever been and now you're even older!" in the beginning part of the song...Dan Hickey crossed his sticks over his head at one of the song's pauses (maybe to show Flans just how much of an 80's style rocker he is?)...there was less freeze-frame posing by the band members this evening, Dan Miller and Danny Weinkauf did it a little bit during some of the pauses), which went right into -->>> Twisting (Flans yelling "Come on! Come on! during key moments in the song...there was a "mad jam" sort of ending to this tonight), which went right into -->>> Why Does The Sun Shine? (Flans: "millions and millions of miles away, and that's why it's in the sky," with Linnell continuing "but even though it's in the sky, the sun shines night and day"...Flans: "people, women, ladies...the sun contains estrogen, estrogen, estrogen, and more estrogen"...cute little extra ending tacked onto the end of the song: basically just the same ending repeated, only stronger) Next, the horn section came back onstage, and Flans said "we're slowly moving toward an all-horn world," as the next number involved just horns and his vocals (no guitars, drums or bass): Chess Piece Face (Velcro Horns & Lin on Baritone Sax...Flans included one line of new lyrics: "All hail Chess Piece Face!") Whistling In The Dark (this was fantastic!...Velcro Horns, Lin on accordion, Flans on the big bass drum...Flans almost let someone in front of the stage hit the big drum, but he later said "what a bad idea that is.") She's Actual Size (with Flans "fuck-up": as he began to sing, he stopped, walked over to Mr. Linnell saying "give me a key." John L. obliged by hitting a note or two...Flans said "that's not helping," laughing a bit by now. Linnell then played a tiny piece of mysterious incidental music for him, and John F. got himself back on track -- but not before saying to the crowd: "You should come see the show sometime...smooth!" :-) Tonight's version was very slow, sultry, and lounge-y. There was a Dan Hickey drum solo included, where Flans directed Mr. Hickey on which particular drum he wanted him to focus on while he played, in improv/conducting fashion, Dan Levine was on euphonium for this one. Ended with Flans directing the band in Dan-Dan-John-Dan style, where he points at whomever he wants to hear play. The Guitar (absolutely awesome, show-stopping version...Velcro Horns, Flans on guitar, Lin fluctuated from bari sax to keyboards to bari sax, massive strobe lighting during a part of it... at one point, Dan Miller and Danny Weinkauf were playing alone, while the audience clapped along, which went right into -->>> Everybody Conga (Flans [singing]: "I'm not fucking kidding, say goodbye to your ride home"...mass confusion, and a multitude of people all trying to conga at once ensues...very fun to watch from above, in the balcony) which went right into -->>> No One Knows My Plan (Velcro Horns, Lin on keyboards, Flans on guitar...the conga line is *still* going) Afterward, Flans tells the audience "That was just a character, saying all those fucks...I love you guys." Then he proceeded to tell us that LA didn't seem to get the conga idea while they were performing out there...Dan Miller leaves the stage. Turn Around (slowed down, but with a distinct, measured beat, almost metronome-ish...Velcro Horns, Lin on accordion, Flans on guitar, song cranked out to a big horn-blasting finish) Linnell at this time states that he believes that tonight was the best show so far (of the Bowery shows, that is) Dr. Worm (excellent!...Velcro Horns, Lin on accordion, Flans on guitar...Lin sings "I'm a wo-o-orm, yeah!" again tonight during the song...Dan Levine used the euphonium to play that big "Bwah!!" toward the end of the song...Lin includes a sweet little accordion solo even closer to the ending, and it was this big powerful butt-kicking finish. Encore:, Spy (I'll tell you, when I heard how this sounded tonight, I almost had to ask my husband to pinch me, because I thought I had died and gone to heaven...words can't nearly express how it sounded...full band, Lin on Bari Sax, totally gangbusters, all-out, sweep-the-floor-with-you version...I felt like I was in this totally rockin' jazz club for a while there, and it was New Year's or something :-) Great improv with *both* Johns conducting the full band. Istanbul: intro was Dan Levine on trombone, Jim O'Connor on trumpet, Lin doing light back-up with the keyboards...the music they were playing had a very atmospheric sound to it...Latin version of song with full band (sounded wonderful!), Velcro Horns bopping back and forth to the music at one point, Lin on keyboards... sped up, powerful, finale-style finish, followed by everyone leaving the stage except for the Velcro Horns, who played a beautiful, soft piece to wrap up the show.

All in all, a fantastic evening!

Review by: John J. Ryan This was the horn show. One of my favorite local bands You Were Spiraling opened up for them. They left the stage to the tune of "One More Song!" from the crowd after performing a rousing rendition of A-Ha's "Take On Me".

The velcro horns. From right to left, Dan Levine on trombone, the buried Jim O'Connor on trumpet, and the new ringer on tenor sax, Stan Harrison, the one reading sheet music. For The Guitar, Spy, and Chess Piece Face, John Linnell joined them on bari sax. This made for an 8-piece band that night!

It was great to hear Purple Toupee for the first time live. The night had a "Live in NYC" flavor, as in the famous Live Disc. The horn arrangements were exactly the same, especially with Chess Piece Face. Also it made it right hear songs like Racist Friend, the Guitar, No One Knows My Plan and Dr. Worm they way they are MEANT to be heard.

And speaking of No One Knows My Plan, no room to conga! I was front row center and decided that this would be my one night to buck the trend of never leaving the front and congaing. No one joined me. And there was no room to move. It is true, this cool New York s**t CAN go so far.

I had a personal moment tonight. Flansburgh wanted to play Radio TMBG a different way that night. He scoffed at my notion of ska.

Dan Levine doubles on euphonium for Particle Man. He also brought it out for She's An Angel and the low D on Dr. Worm. Dan Levine is one hell of a player, better than me at soloing. On Istanbul he was hitting some soft high notes that you really need to squeeze out of it.