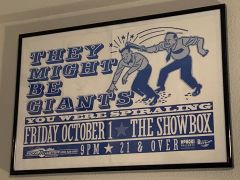 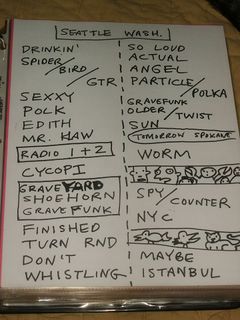 They Might Be Giants
Showbox in Seattle, WA
October 1, 1999

Review by Kreadoubt@aol.com:
This show was even better than the night before! I had such a good time I didn't want to leave! I had to go get my ticket through Will Call, yet again. I got to the ShowBox theatre about 8:20. ShowBox is appropriately named, a small "box" for shows. Anyways, I'm standing there and 2 girls in front of me were having a disagreement. "I can't believe you are dragging me in to this. I really don't want to go" Just as she says this, one of the bouncers walks out and announces...."If you don't have a ticket, or are not on the guest list, you aren't getting in. The show is SOLD OUT" It seems as though the girl who was being "dragged" to the show, didn't have a ticket, but her friend did. Short story, even shorter, one of them left in a huff. heehee.

So anyway, I get in the door just after 8:30 and realize that this show wasn't even going to start until 10:00. UGH! So I wander towards the stage looking for friends that I found out didn't even bother to show up until after the opening act. grrrrrrrrr. I walked towards the right side of the stage, near the keyboard and start looking for anyone I might know. I managed a spot right up against the stage just off to the right of the keyboard. I was very happy with my spot, and decided there was NO WAY I was gonna budge. I had never been so close. There was no barrier and the stage was about waste high. I was so close to everything i could read the stickers on the equipment..."down stage right" "up stage right." I could tell you which lights were lit on the consoles, even where the button was to the confetti cannon. BTW, in case you were wandering, there's a power strip on the right side of the keyboard that Linnell flips on just at the right second that makes the cannon explode.  :) I could even read the sign on the Golcenkspiel. There was a blue terry cloth towel covering it, with a big piece of masking tape over it that reads..."Glockenspiel Cover" Yep, it actually says that.

About 10:00 You Were Spiralling came out. I like this performance much better. The lead band member had gotten a hair cut and we a little bit more mellow for this show. It just seemed like a much better performance. Maybe it was were I was standing, though. They played till about 10:45

Stage set up took about 20 minutes and then all seemed relatively quiet on stage. Someone crossed the stage sporting a lagre punch bowl full of ice and many many small bottles of liquor. I watched as that person disapeared back stage....hmmmmm. Then Dan Hicky [sic] came out, seemed to be looking for something, then left the stage. A few minutes later went by, and he came back out with a guy, I'm guessing was their stage manager. Dan seemed to be trying to explain something to the guy and the guy seemed like he was annoyed. They crossed the stage a few more times before going back stage. Meanwhile, this guy came over and stood to my right. And I was thinking, he's not going to see much from that spot because of those speakers right there. I then realized he was a bouncer. I said hello to him and he said hi. Then said, if things got out of hand that he would need to get up on the stage. I suppose he just felt like I needed to know that. Oh well....

FINALLY! Dan Dan and Grahm (yeah Grahm Mayby) came out on stage and started the show with... (in no particular order)

Drinking - John and John came out half way through and joined in.

Radio TMBG - JF " I think we shoud do that one again, so they will remember it."

Radio TMBG - JL "Hey John, Let's do it one more time, just for the heck of it"

Radio TMBG JF "I think we peaked the second time around"

James K. Polk - JL "WOW, who would ever dream about singing about the Oregon Territory would ever get a crowd going?"

She Thinks She's Edith Head ( I really like this one live)

I Love the Glockenspiel

Shoehorn With Teeth - JF "We need a voooooluuuuuuuuuuunttteeeeeeeeeer from thhhhhhhhhhhe BAND! Where IS Dan, anyway?" Dan Hicky [sic] was off to the side hding

Shoehorn With Teeth/CD fast forward version - JF "So uh, how many of you were there lastyear at that summer music festival thing we played at? *much cheering* Well, if you weren't there, we played in this indoor soccer arena, so we didn't really feel that would could get away with doing something like this. But, we're feeling pretty relaxed now"

Don't Let's Start - "Well, here's a song that was our very first single, EVER!" Afterwards....JF "Yeah know, I was thinking about music from the eitghites, yah know like The Go Go's, with 'We've got the beat' and I was thinking how THAT song just was to close to Don't Let's Start as far as style. Of course we can admit that now, since that was like a decade ago. But yah know, back then we thought we were really doing something different"

Whistling In the Dark - Complete with Bass Drum JF "That song defined the music of the eighties" JL "Nineties John! That song was from the NINTIES!" JF "Well, it was WRITTEN in the eighties, but you're right, it came out on our first album of this decade in 1990. so yeah! It was the cutting edge of the nineties."

Maybe I Know - John and John duo, no band. John Linnell on Keyboards and John Flansburgh standing next to him with the wireless mic.

That list is in no particular order, but I think I got at least most of what they played.