They Might Be Giants
— with Lincoln opening —
Brandeis University in Waltham, MA
November 19, 1997 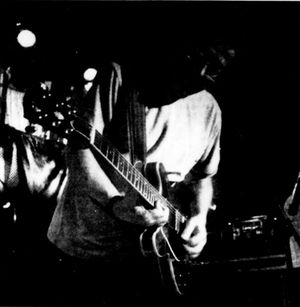 From The Justice: They Might Be Giants' guitarist John Flansburgh hypes up a packed Levin Ballroom last Wednesday night.

"They Might Be Giants Rock a 'Little Birdhouse in Your Soul'" by Steve Mirarchi
The Justice, Nov. 25, 1997:

As alternative pop seems to be catching its second wind, it's refreshing to know that a band here or there can defy musical currents by continuing to create compelling, innovative records that redefine the word "alternative."


One such band is They Might Be Giants, who for more than a decade now have been thrilling critics and fans the world over with their offbeat lyrics and immense musical scope. Though founders John Flansburgh and John Linnell run their act out of New York, where they perform regularly at the famous Mercury Lounge, each was raised right outside of Boston in the quiet suburb of Lincoln. As they finish up their current tour in support of their latest album "Factory Showroom," it was logical for them to stop close to their home away from home.
Though this Wednesday's show in Levin Ballroom was barely advertised, They Might Be Giants have a reputation for drawing huge crowds wherever they go, and this time was no exception, as fans from all over the Boston area nearly packed Levin to its 900 person capacity.


Witnessing a Giants show is, to use the allusion of Flansburgh himself has spoken of, much like pulling back the curtain that hides Oz. The show started with the offstage Flansburgh and Linnell dramatically reading clips from their press reviews, as the stage lights flashed maniacally. With a grand flourish they announced their own arrival, and they pranced onstage sheepishly, as if just introduced by Dick Clark himself. This self-spoofing buffoonery, evident in much of the Giant's lyrics, makes for a show that is immediately engaging and immensely enjoyable.
Once onstage, the Giants launched into the fast dance pop number "New York City," followed by the historically irreverent "James K. Polk," during which a small cannon fired a load of confetti into the audience. Linnell then picked up his accordion for a soft rendition of the unreleased, strangely melodic "Dr. Worm."
With the initial surge of energy out of their systems, the Johns engaged in chit-chat with each other and the crowd, sounding like a cheeky Laurel and Hardy as they took fun stabs at Art Garfunkel, Pearl Jam and No Doubt.


"We do these fake songs for no real reason," Flansburgh noted shamelessly, as the Giants belted out a modern jazz stream to the "Planet of the Apes" theme while motioning the crowd to chant "Ah Ape!" at regular intervals. After a stirring version of the hopping "Birdhouse in Your Soul," the Giants declared that the time had come for "the part of the show when you're no longer an observer." Bouncing into the tropical shuffle of "No One Knows My Plan," the band urged the crowd to form huge conga lines, which they eagerly did, and Levin transformed into a throng of human ropes.
Giving the crowd a chance to calm down, Linnell again reached for his accordion, dishing out unusual pathos in the new song "Finished With Lies." The likeable oddness continued when Flansburgh sang "Lie Still, Little Bottle" while banging on a huge tribal pole on the stage as Linnell coaxed gentle lamentations out of his mammoth saxophone. At this point, They Might Be Giants had been entertaining for more than an hour, but they were far from finished. The rest of their energy-jammed set ran mostly like a best-of album: fans bobbled to the syncopated rock stylings of "Ana Ng" and swayed to the nasally "Particle Man," during which Linnell hilariously improvised Ace of Base's infamous "I Saw the Sign."


For their strongly-urged encore, the Johns first abandoned their instruments, hoisting long poles with dummy heads over and around the audience, puppeteering them to ventriloquize "Exquisite Dead Guy." The Giants finished off with the romping, Arabian "Istanbul," sending their fans into a joyous slam-fest.
Combining self-aware humor with straight-ahead danceable rock, They Might Be Giants are one of those rare bands whose jokes are always fresh, who you want to see again and again.