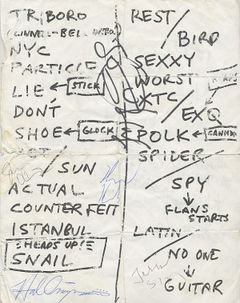 Review by John Ryan:
I know that it has been over a year since I saw this show, but I must comment on it since you have given me the opportunity.

What can I say about a show where all the fans have a TMBG sing-a-long before the show! Thank you TDK for that.

I had only been listening to TMBG for a year, but I would say I knew 90% of what they played. I don't think I knew Triboro or WDTSS, which kills me now!

My then new girlfriend and I had an "our song" and low and behold, New York City was played right after the opener!

I was quite impressed with the conga line for No One Knows My Plan, the cannon for James K. Polk, and the glock for Shoehorn With Teeth. I was really happy though when they played Don't Let's Start. They do such a great job with that song. Everybody pogoed for Birdhouse, and that was great fun. But the place went nuts for Spy. Instead of screaming when Flans pointed to the audience, we all screamed, "SPY!!!" Flans looked at me and the audience after a while and deadpanned, "Just scream." Wow.

I loved Older. That was a case where the Giants were at their looniest. "Sing, Damn You!!!" as we all sang.

They ended with a couple of mosh-pit songs, Till My Head Falls Off and Dig My Grave. However, a mosh pit never occurred during the show. Thank God.

After listening to TMBG for only a year then, going to the show showed I still wasn't completely up on them. Since then, I got their latest live album, as well as some bootlegs. Now when I see their next show, I will be prepared. Hopefully, that will be soon. Watch for the TMBG chat room on AOL during nighttime.