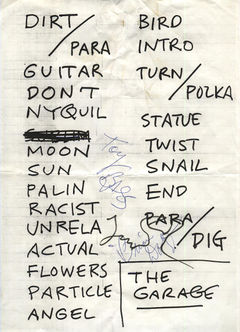 TMBG's first show in the UK with a full band. The set was great, it was strange hearing the old songs with a band for the first time, but I remember being very excited and positive about the new songs which were being previewed here for the first time (John Henry came out shortly after). There wasn't too much stage banter compared to previous duo shows I'd attended. The small stage at The Garage also seemed very crowded by the 6-piece band, although the horn players came and went from the stage throughout the show. If there was an encore I don't remember what it was, and the setlist from the stage doesn't indicate. I do remember that, after the band had left the stage, 'Subliminal' played over the club's sound system and the audience danced to it. I was lucky enough to talk to JL before the show and briefly afterwards, but then got talking to bass player Tony for quite some time and he invited me and my sister to be guests at their Manchester show later in the year. - Astralbee