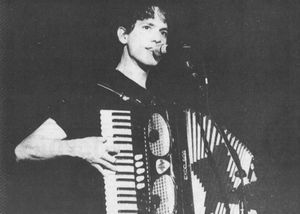 From The Daily Tar Heel: They Might Be Giants performed Tuesday night to an enthusiastic crowd at Duke University (Photo by Jennie Shippen)

This concert was the best I've ever been to. Ever.


No, I'm not a They Might Be Giants fanatic. Disclaimer no. 2: I've never ever been to a show where people stood up.


Everyone stood up. The whole show. And they bopped. And they screamed. And they sang along. They chanted and waved and had a damn good time! I have seen the light, and I have been heeeeealed!
The opening band, Syd Straw, was boring, but the crowd was hyped up and gave it a good response at the end of each song, even though everyone talked during the songs. The "Highway to Hell" cover was especially scary with a tambourine and harmonica. 'Nuff said.


They Might Be Giants came on stage at 9:30p.m., jammed, said hi and launched into "I Palindrome I," off the latest release, "Apollo 18." Most of the crowd seemed familiar with the album, because the 10 songs they played from it got a vigorous response. "The Guitar (The Lion Sleeps)" probably was received the most enthusiastically. The band added the "awee maweh" parts from the original that are not on the album.


Unlike most bands, TMBG was not ashamed to sing old favorites. "Particle Man" from their third album and "Flood," were some of the first songs they played, and the audience ate them up. "Ana Ng" from their second release, "Lincoln," went over extremely well also, as Linnell interjected an "It's A Small World" chorus. Even less-known songs got the crowd bopping — during "Your Racist Friend," the audience sang along for much of the song.


John and John talked occasionally during the show, with Linnell once explaining: "We're going too fast — we're going to talk some more. We'll be done too early ..., and there'll be trouble," he finished in a dire radio announcer boom.
One hit was "stump the band." TMBG asked for requests for songs they don't know how to play. (Sorry, folks, "Freebird" has been done.) "Stayin' Alive" and "Mr. Roboto" were big contenders, but they finally decided on "Brown-Eyed Girl" by Van Morrison and apologized for steamrolling it.


The band played songs you would never think could be performed. "Purple Toupee" was like speed square-dancing, with feedback and guitar licks.
TMBG ended with "Frankenstein," an instrumental cover so funky that Linnell, who usually is stone-faced while playing the accordion, danced and headbanged — and do you know how heavy accordions are?