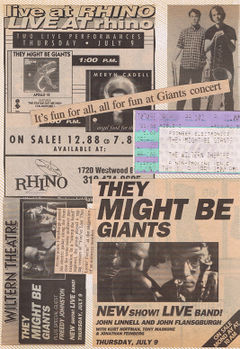 In addition to Syd Straw being there I believe Doc Severinsen or another trumpeteer from the Tonight Show band also took the stage and played. Actually, the trumpet player was Sal Marquez, who was indeed in the Tonight Show band. He participated in the audience request, "You've Lost That Lovin' Feelin'" This concert was covered by Rolling Stone.

THE WILTERN THEATRE, LOS ANGELES, CA—In many ways the Brooklyn duo They Might Be Giants (Elektra) is the musical equivalent of a Gary Larson "Far Side" cartoon—their songs take a skewed, often outrageous look at the human condition and the ironies of the scientific world with a zaniness grounded in intelligence. Their performance was sincere, joyful and never condescending, letting the bouncing audience in on the joke every time.

Resembling the clean-cut, super-smart wisecrackers from everyone's science class, John Linnell (accordion, vocals, sax) and John Flansburgh (guitar, vocals, trumpet) romped with an excellent backing band through hilariously inventive arrangements which touched on a full spectrum of styles. "Dig My Grave" turned into a distortion guitar playout, while "She's Actual Size" and "If I Wasn't Shy" were sparse and downright jazzy. One of the show's greatest moments was an extended polka jam—you could almost see steam rising from Linnell's fingers as he worked out on the rock 'n' roll accordion.

The Giants brought down the house with catchy signature times like "Don't Let's Start," "Birdhouse In Your Soul" and "Istanbul (Not Constantinople)" as well as new entries from their latest release, Apollo 18, including "I Palindrome I" and "My Evil Twin" ("He even has a squid like me," sang Ransburgh). They took suggestions from the audience during a "stump the band" segment that resulted in a great treatment of "You've Lost That Lovin' Feeling."

Tonight Show trumpeter Sal Marquez and folkie vocalist Syd Straw dropped by to contribute to the madness—most notably on "The Guitar," which incorporated an off-the-wall take on "The Lion Sleeps Tonight" into its refrain, and tapped the skills of Marquez and sax player Kurt Hoffman (who also handled keyboard duties) for a sizzling brass jam. Marquez' bright accents also added punch to the creepy mood of "Whistling In The Dark."

It would be tough to find an audience whose unhinged enthusiasm matched that of the crowd on hand at The Wiltern that night. They danced in the aisles, did the wave in the balcony, whooped at Flansburgh's guitar antics and twofisted double-trumpet play, and most impressively, could recite every word of the Giants' tongue-twisting tunes. Like the Everly Brothers on speed, the two Johns provided them with a good-natured, though manic set that was obviously savored by all.