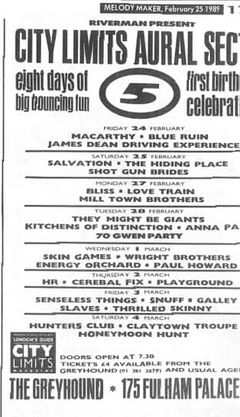 AS WITTY repost departments and square dance satire goes They Might Be Giants are truly statuesque. Taking American harmonies and Michael Stipe slurs they add warbling accordion, syncopated guitar squeals and honking sax to create the most chaotic Country pastiche this side of a feedbacked Hank Wangford.

The one with the glasses waves his arms around like an extra in The Naked Gun while our 'dependable British sound' screetches their toons, so they sound like a faulty car alarm. The drum machine is all over the show, hip-hopping through the '60s crooning and bouncing melodies proving that perhaps 'Rhythm Section Want Ad' is a good song title after all.
A jaunt and a lumber later and 'Bullets From A Gun' [sic] is acting all Peter Sellers-film-theme-tune like, mixing smirks with suspense. These people take the past and then take the piss in the most uncoordinated pop style ever. An audience member is invited to thump a large branch on the stage to keep time, while the Giants straight-faced and tongue-in-cheek a capella their way through a Costello graveyard shuffle.


Their expert wrestler mother, represented here by giant face pictures, continues to look down in pride and the sound of cracking bones can be heard as the Might Be's break their wrists patting themselves on the back. TMBG put the parody into melody. Now, where did I leave that First Aid kit?

The Johns played a one-off gig at the Fulham Greyhound last night, just the two of them, and if shambolic was ever a compliment... Their performance, their technique, personifies the perfect imperfection.


On stage at the Fulham Greyhound, John F. said: "This is a song about falling in love, falling out of love, finding the one you love and killing them." I think that neatly sums up the Giants' clown-under-the-bed darker side. "That's 'I'll Sink Manhattan' which is a song about a guy who somehow figures out how to sink the island of Manhattan just to kill his ex-lover, so it's his apology to the other people he's gonna kill inbetween. He's just gotta do it!"