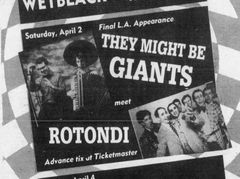 They Might Be Giants
— with Rotondi opening —
Club Lingerie in Los Angeles, CA
April 2, 1988

Billed as "They Might Be Giants meet Rotondi" as well as the band's final L.A. appearance. Tickets were available in advance.

They look like the kind of square pegs who never got laid in high school and were allergic to everything — which I think is incredibly sexy − and they sound like cerebral cabaret hell-raisers. New York's They Might Be Giants, a hearty rock duo, just might be the next big thang... okay, giants. They've got an accordion that pumps harder than Schwarzenegger and a sax that blows like...; lyrics ("Kiss me-e-e-e, son of God..."') heady enough to keep them off the bar mitzvah circuit; and videos ("Don't Let's Start"), directed by Jonathan Demme. [sic]
Why, after a little skiffle number like "Youth Culture Killed My Dog," you'll see that they're the wildest team to emerge from Gotham City since Batman and Robin. This is a grand night for squeeze boxes, as every mother's fave polka ensemble, Rotondi, joins the fun − at the hip.