Music video for "I'm A Coward" 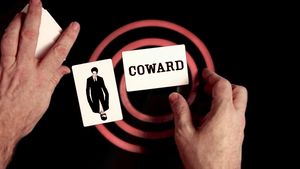 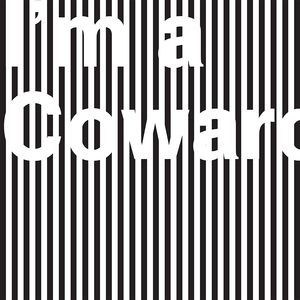 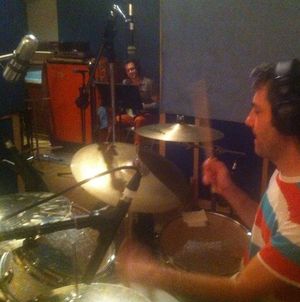 Danny Weinkauf and Marty Beller recording "I'm A Coward" in the studio, July 2014[1]

That’s a song that was completely generated by the title. It seemed like a really weird declaration to make, because it’s a very paradoxical idea to declare in a public forum that you’re a coward. To say you’re a coward, there’s a nice amount of contrary motion there that seemed intriguing.

Ultimately, it turns into a love song. It kind of invites a crazy level of tenderness. It’s got such strange elements –all that crazy, churning electric guitar is all recorded backwards. It was a very psychedelic recording process, cooking up that sound and figuring out how to capture it. A lot of things sound cool backwards automatically, but combining Dan Miller’s very formidable electric guitar skills and a track that churns as slowly as that — it was a really nice combination. It was almost getting back to the experimental days of working, where you don’t really necessarily have a notion of what you’re working on, you’re just kind of working with sounds. That pinging sound — it sounds like some sort of guitar version of tinnitus — that’s just chords that are happening on a second guitar, and I’ve just sampled myself and played it back.

That song is very much like a lot of songs in terms of the process. There’s a lyrical spark that gets things going, there’s some material that was created in the lab, and then layered on top of that is our formidable band doing their best work in the studio. We get the most out of the recording process at every turn. It’s not just about capturing a good demo, it’s not just about doing some experimental sonic work or just having the band rocking out in the studio — it’s all of those things smashed together.