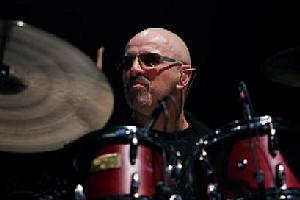 Frank Vilardi on the drums

Frank Vilardi, ominously known as the "International Player", is a session drummer and percussionist who toured with They Might Be Giants for a series of shows in early 2008 while regular drummer Marty Beller was on leave after the birth of his son.

Vilardi and John Linnell both played on Suzanne Vega's song "Tired Of Sleeping," recorded at Skyline Studios around the time Flood was recorded there.