From This Might Be A Wiki
(Redirected from Azure Skin Feedback)

Post feedback and issues here regarding the March 17, 2007 switch to Azure as the default TMBW skin.

Since the skin changed I am running Blanko, because it's the one closest to Azure and still running smoothly on my PC. There are some things I'd like to point out though.

One of the tabs on the preferences page overflows to a new row. Again, nothing not working, just visually inconsistent. Stalefries 17:53, 17 March 2007 (UTC)

Yes. (Edit: Oh man, the other two are just as awesome! Though in the ChoppingBlock one, maybe it's just me but I don't like the way the containers have a slightly different orange than the background. STILL: Awesome!) -J2

The new skin is great! Very cool. I also like how the old one is still available; I can't tell you how many times a website has changed format and then I can't find anything anymore. But, I don't think that will happen this time. Great job! -A Moose Denied

Yeah, so back a month ago or so, I wasn't a huge fan of it, and now I'm not either. I like things to have simplicity, without excess really (aka things that are boring...), so I like the old one better. But that's just me, and I only felt like sharing my unimportant opinion. It does look really great (though the Chopping Block is even better in my opinion), very fun, and it makes the wiki a lot cooler in respect to the fact that it is a website about a band. Yeah. ~ magbatz

I'm thinking I like the old one better, but then again, i am afraid of change. It's pretty cool, i miss having Will A. White in the corner... Jade

Honestly (and no offense to Gena!), I thought the same at first regarding liking Monobook more. After setting my skin to Azure for a day or two, though, I was hooked. The new skin's feel does take a little getting used to if you're a hardcore Monobookian. :) -CapitalQ ♫ talk ♪ 02:00, 18 March 2007 (UTC)

This skin is wonderful! Congrats to Gena and her cohorts. -- Writer61

I'm loving the skin (the time-based changes are awesome), but could something be done about the semi-transparent areas? I know I'm an edge case (500mhz P3, blazin' fast!), but is it possible to turn it on or off? It's bad enough for me that it cause TMBG Radio to skip whenever I scroll. Thanks. Stalefries 03:11, 20 March 2007 (UTC)

Azure is awesome! Too bad that it's crap on Internet Explorer, since that's all I have available during lunchbreaks at work. --Xannie 13:17, 21 March 2007 (UTC)

I use IE6, and can't log in at all because the log-in box doesn't show up. Screencap. I find the font hard to read, so I had to create an account using an alternate browser to switch back to the other scheme. I'm sure a lot of work went into the new scheme, I appreciate that, but I don't understand why it's the default when it's got so many problems. Why not have the clean simple one as a default and say that creating an account will give you fancy and colorful scheme options?

Me too. My cookies must have cleared or something, but I got logged out, and now I can't get back in, since the site won't let me log in. ~magbatz

Thanks! Is there a way to link to the whole wiki with that skin? I mean, if I were posting the link in a journal entry or something, is there an addition to the url I could add that would make it appear in Monobook to whomever clicked the link?

You can use the &useskin parameter with any URL and you can set it to equal any skin. But you have to change the index.php/ to index.php?title= or you'll get an empty wiki page. Also, any link you click from that page will be in the default skin, as they won't have the useskin section in it. --badqueso 18:40, 28 March 2007 (UTC)

When I saw this, I was like "HOMG, I typed the wrong oorl." I checked my Address Bar, and noticed that my oorl was indeed right, tmbw.net. I then decided to type a song, and saw, that all was indeed good.

Then the word "oorl" got stuck, and now I'm typing this. Great job on making me think I typed the wrong oorl. I mean, the skin looks like some new age cult home page or something.

Azure is awesome! Too bad that it's crap on Internet Explorer, since that's all I have available during lunchbreaks at work. --Xannie 13:17, 21 March 2007 (UTC)

I'm having problems clicking in the text boxes when I'm using IE, so searching the site and logging in is problematic. I'm using IE 6.0 --Dr John Oakland 23:33, 22 March 2007 (UTC)
Duke33, I sent you an email through gmail with screenshots of the problems I'm getting. It's from xandella at gmail in case it gets put through as spam. I'm also getting the same edit window problem as Christina Miller. The scroll bar disappears and part of the right margin of text gets cut off in the display. --Xannie 15:33, 23 March 2007 (UTC)

When I use the edit window, it periodically jumps to a format under which the words run out of the edit window to the right and become invisible to me until the line wraps around. What am I doing wrong? [~Christina Miller, March 2007]

IE. It's fine at first, but when I start typing, the screen lurches, the edit window widens, the right hand scroll bar for the edit window vanishes, and then I am left with a window not quite wide enough to to see everything I type. Tried moving the desktop menubar around, resizing stuff, and this sometimes snaps the edit window back for a while to the proper shape with a side scroll bar, but as soon as I start typing again ... I was hoping this was a simple setting problem for me. Is no one else seeing this? [~Christina Miller, March 23, 2007]

The trouble is that most of our users are on Firefox, so we didn't spend too much time on IE6 compatibility for the skin after getting it to the point of usability. In addition, the fact that neither myself, Brad or Gena have IE6 installed or available to us made the situation even worse off. I'll make Gena aware of the situation, but I don't know how much she can help, being an OS X user. Agh. -CapitalQ ♫ talk ♪ 18:15, 23 March 2007 (UTC)

Big J! Not to act all entitled to what is a free service here, of course, and not that I don't feel your pain, but numerically I have to pick a bone with you .... The entire internet universe is a possible user of the wiki, and 80% of them, more or less, use IE either because it came with the machine, or because they are using a work computer and get no say in the browser.
Just to make sure I understood your reply - you guys *designed* the site to the browser specifications of perhaps 15% of the total browsers that might see the site, so I am out of luck, being in that unlucky majority. :) Hee hee. Alas and alack.
Is there no way to jigger this from my side? [~Christina Miller, March 23, 2007]

I'm aware of the overall statistics, but we tend to fairly get a more technical userbase here (hence only three users reporting issues with IE6 so far). Sadly, there's nothing you could do yourself to remedy the situation other than registering an account here or switching browsers (an upgrade to IE7 would suffice as well), but I understand if neither is a desired solution for you. Gena made a few IE6-specific tweaks to edit fields a few hours ago, see if anything's changed after clearing your browser's cache (Ctrl+F5 I believe). If not, we'll have to investigate a bit further. :) -CapitalQ ♫ talk ♪ 22:27, 23 March 2007 (UTC)

Well, I have to add myself to that list as well, since I usually go here from my school-issued laptop which only has explorer. And did you actually suggest to Ms. Miller that she register an account?! Silly Jon... But I agree that, independent of how good with computers the users are, since IE6 is a default browser for most, we should make sure that as many users/visitors as possible can look through the wiki with as little trouble as possible-- so my advice is (a warning: this may completely and utterly blow your mind) to fix whatever problem IE6 users are having with Azure. ~ magbatz 22:42, 23 March 2007 (UTC)

Yeah, I completely agree with that, I'm a firm believer in the site needing to be fully accessible by all users. We had no idea during launch that the skin was flawed in IE6; just that it wasn't as pleasing aesthetically as it is in more modern browsers. The problem is, like I said, that none of us have it installed and the skin's designer/coder is running OS X. She's doing the best that she can with the information she's been given about the issues. -CapitalQ ♫ talk ♪ 22:55, 23 March 2007 (UTC)

Well, I could try helping out with making the skin IE6-friendly. The only problems is, though, I'm pretty much useless when it comes to that type of stuff. And yes, IE6 did make me count the colons wrong, stupid internet explorer. ~ magbatz 23:02, 23 March 2007 (UTC)

Ha ha! You guys are great! I didn't mean to stamp my little foot about this; I was just concerned that if I had the problem, other people probably did as well. I appreciate all the work you have done on this; it looks spiffy and is clearly a labor of love, Gena and Jon and all. And magbatz, yes, Jon has chased after me quite nicely with a broom, sweeping me gently towards registering, as any good caretaker of the wiki space would do.
I am sure they will upgrade our browsers at some point, but they tell us nothing other than on pain of death, download ye neither the executable nor the p0rn. I am glad for whatever you can do, really.  :) [~Christina Miller, March 23, 2007]

I know this one is fairly irrelivant due to anyone using IE:Mac requiring a slap round the face - but the side bars break fairly badly and so on and so forth. 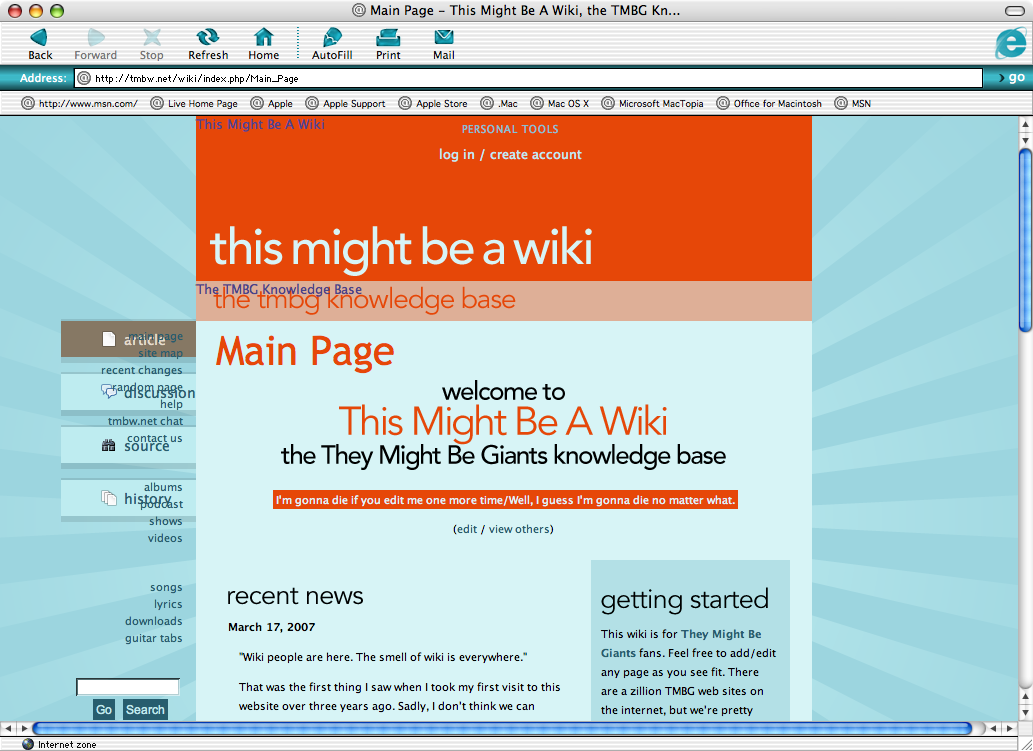 I don't know if this is just the way the block quote is supposed to look like or what, but

What I Think About Azure[edit] I have also experienced these issues, although they seem to happen intermittently. The strange titles have resolved themselves for me. In addition, some pages refuse to load and simply display as blank, white pages (the source has no data at all). Earlier this happened to the recent changes page several times.
I am using Chrome and running Windows, which proves that this isn't Mac-specific. --98.109.221.23 00:49, 16 March 2013 (EDT)

just fyi, a lot of your problems are related to recent upgrades, and not the azure skin itself. the main page titles issue is probably something else, though. --