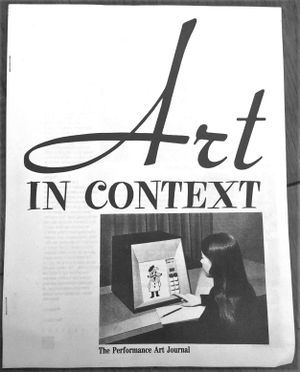 Front cover of Art in Context 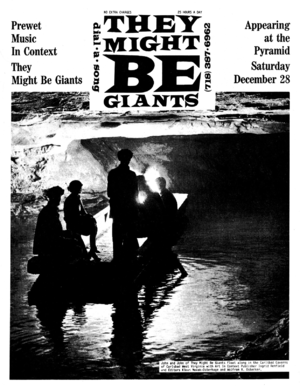 Back cover of Art in Context

Art in Context was a zine that John Flansburgh and Bill Krauss wrote, produced and printed in late 1985. It contained early advertisements for They Might Be Giants, and reviews of various East Village artists and friends of the band.

The zine was created on Krauss's Macintosh 512K and printed on an Apple ImageWriter printer, and photocopied approximately 300 times for distribution.[1] Its contents were described in great detail by Krauss in a 1994 interview:

Flansburgh and I, in a spirit of just having fun, created an eight-page magazine called Art in Context, which we did mostly on my early Macintosh in '85. Flansburgh did paste-up and stuff, and we created a really pretentious art magazine. We did it all under pseudonyms, although my name and address is in it as something to find. All of the names were made up. There's 'Klaus Novek Osterhog'-- we figured it was German expatriates in New York, so the editors were 'Luftholm R. Auftika' and 'Klaus Novek Osterhog'. The publisher was 'Ingrid Renfield'. They had two foreign bureaus-- one in Berlin and one in Los Angeles-- that was foreign to New York-- and the two interns were the sort of WASP preppies, 'Hutchinson Connelly IV' and 'Francis Beef'.

We reviewed all these East Village musicians and performers and artists. Frieda was this friend of Flansburgh's; it was this lady named Barbie Lipp who had created this performance art thing. [...] We reviewed the Jicketts, Chet Grant, Nick Zed-- who's this downtown, nasty old filmmaker, Arto Lindsay, Joshua... So we had pictures and did reviews of them. They each had about half a page. We took excerpts from real art magazines, like Art in Context, Art in America, and Performance, took them out of context, and inserted the names of the people we did reviews of. Here's the performance of They Might Be Giants; this is by someone named Franz Heidler:

It is now undeniable fact that the doppelganger has always existed in art, much to the dismay of the sycophants of cult gentrification. Its recent re-emergence breaks the reflection's surface with double-headed aplomb. The guys of the performance duo They Might Be Giants, thus reversing the virtual and the real, the figure and the ground. Their technological matrix acts as camouflage. The raw image of mirth concealed therein forges the foundational figure to define the form: Cryogenic art.

That's just half of it. What we did was we took the structure of these things, and the only things we changed were the names and the adjectives. We mailed out about 300 of these things. All the stuff that isn't reviews are ads for They Might Be Giants. Nothing was done just for preservation; everything was done to have a use.

In early 2021, a copy of the zine was raffled off by Krauss in a fundraiser to support non-profit arts organizations that were hurt by the COVID-19 pandemic.