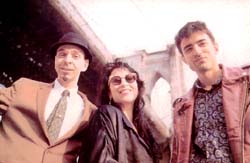 Annabouboula was a Greek-American synth-pop group from New York City that was active in the late eighties and early nineties. Its members were Chris Lawrence, George Sempepos, and Anna Paidoussi. Earlier, Chris Lawrence had played in The Turtlenecks with John Flansburgh and was also roommates with John Linnell, who found the record from which the saxophone sample in "Number Three" was taken while helping Lawrence clean a vacant apartment. In addition, Linnell played accordion and organ for this Hellenic trio's In The Baths Of Constantinople (released as Hamam in Europe).