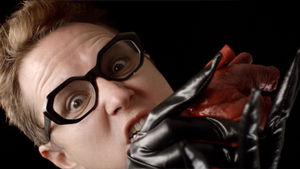 Alex Italics on the set for "I Can't Remember The Dream"

Alex Italics is an award-winning Los Angeles-based music video director who has been creating They Might Be Giants videos since 2014, beginning with the TMBG contest-winning "Am I Awake?".

His videography for the band currently consists of:

In an August 2021 AMA on reddit, Italics provided rare insight into the process of collaborating with John Flansburgh on the band's music videos:

It is difficult to overstate how involved John F. really is in the video element of TMBG. He is a true renaissance man that has an encyclopedic knowledge of pretty much all artistic mediums, and is equally as creative as he is articulate with his creativity. Although much of the remainder of the video were ideas generated by me, John was involved in the development of most of those ideas every step of the way.