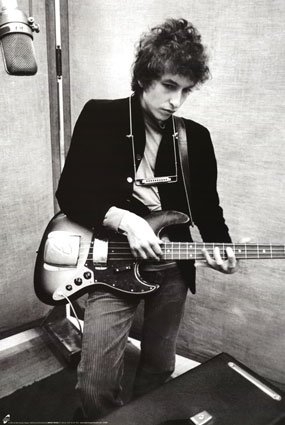 Bob Dylan is a singer-songwriter who has been active since the early 1960s. He is often referred to as one of the greatest and most influential songwriters of the 20th century. He wrote the song "Mr. Tambourine Man," which They Might Be Giants has occasionally covered live, and which served as inspiration for the song "Weep Day."

Flansburgh said in a interview with Ink Magazine[1], "[Bob Dylan is] crazy good. I would give my left half to be a fraction as good as he is."

In 2006, a well-done fan-made impersonation of Bob Dylan performing "Museum Of Idiots" was released on the internet as part of the Reprehensible Songs Project. TMBG found the song on the internet, and included it on Podcast 5A.

On January 10th, 2007, Dylan introduced the They Might Be Giants song "Bangs" on his XM Radio show, "Theme Time Radio Hour," and said the following about TMBG:

While we're on the subject of bangs, here's a couple of guys out of Massachusetts who took their band name from a George C. Scott movie. They had a hard time getting a record deal, so they set up a thing called Dial-A-Song. You would dial it, and it would play a song on their phone machine. They changed it every single day for a couple of years. Here's one they wrote about the fringe you find on somebody's forehead. Here's They Might Be Giants, with their song "Bangs."