Way back in mid-2002, Scott Redd and Brad Will, two employees of an online corporation, started putting together lists of themes that various TMBG songs shared. Brad would email Scott a list of TMBG songs that had "bicycles" as a main theme, for example, and Scott would add to the list. This would eventually become the basis for the Song Themes pages. After a while, Scott suggested that these lists be published, and allow others to add to the lists as they saw fit. Being familiar with wikis, Scott suggested to Brad to use UseMod to publish these lists. After putting together the songs lists, the next obvious step was to add in song pages, so that we could link to the song themes. After several months of filling out the basic framework of the site, Scott and Brad finally had to decide on what to call this thing, before publishing it to the whole world. Brad suggested "Wiki Little Critta", but Scott (perhaps wisely) suggested "This Might Be A Wiki", which conveniently shortened to tmbw.net. In February 2003, the site was ready to be opened to the public, and Brad published the url to alt.music.tmbg. The rest is history, as they say...

In the beginning, several people helped to flesh out the site, which was quite sparse. One notable contributor, Jolene, added great details to several pages, and added photos and bios for John and John, before she mysteriously disappeared, never to be heard from again.

Brad Will and Scott Redd, the founders of the wiki, managed this site on their own in the early years. It wasn't until November of 2004, that Brad promoted MooseBlaster to admin. As a result of massive spam and vandal attacks in late 2005, Brad promoted Ecks in January of 2006, quickly followed by CapitalQ in March. Scott still participates with the wiki, but works more on upgrades, hosting, and server maintenance, rather than site content.

To help Brad automate various tedious tasks, ThisMightBeABot was born three days before Christmas, December 22nd 2004. Rather than using existing MediaWiki bots that ran on Perl or Python, Brad created ThisMightBeABot completely from scratch, using PHP. He's very customizable, and serves many functions today, such as adding missing navigation or categorization, archiving news on the front page, and other boring jobs. As of December 2013, he has made more than 35,000 edits!

While it is taken for granted, this site was originally one of few wikis to allow file uploads. This functionality was not supported by the original UseMod code. Scott found a perl script that allowed users to upload files to the wiki, before MediaWiki. Once we moved to MediaWiki, this custom modification was no longer necessary.

Importing Of Shows From tmbg.net[edit]

In April 2005, based upon Bryce's suggestion, Brad created a script to import shows from the now-defunct tmbg.net site. These old shows were captured from the archive.org site's archives of the old tmbg.net pages. Several people helped clean up the several hundred shows that were imported, helping to ensure that a piece of TMBG history be preserved.

In September 2004, Brad created a song rating system that let wikians rate songs on a score of 1-10. Originally, all votes were tracked by IP Address, due to the way that UseMod was written. After moving to MediaWiki, it was very easy for Brad to modify the code to track votes by userid. Various enhancements have been made over time, such as including the current ranking in an iframe on each song's page, and also filtering out songs that have less than 5 votes, so as to not skew the rankings. In late 2006, these iframes were converted to proper MediaWiki extensions.

In January 2006, Brad created a little snippet of code that allows registered users to mark which shows they have attended. The idea is to foster a sense of community, and allow people to get in touch with others that have been to the same show they have attended.

Showing the true spirit of collaboration that is critical to making a wiki a success, Gena Wenli created three custom skins for TMBW.Net in 2006 and 2007, without anyone asking her to do so. Her first skin, "ChoppingBlock", which was released on September 12 2006, is a fun take on The Chopping Block's designs for TMBG. Later in 2006, after the new tmbg.com was unveiled, she created a custom skin, Blanko, that mimics the design of that site, for us. In early 2007, Brad and Jon worked with Gena on her design that would eventually become the new default skin for TMBW.Net, Azure. Gena tweaked the skin for several weeks, while Jon and Brad helped her identify and fix issues. Azure was finally officially revealed to the public and replaced Monobook as the default on March 17, 2007.

A considerable portion of the discographical details found here on TMBW.Net come directly from the now-defunct tmbg.org discography, originally compiled by John Relph. In early 2009, many release details were imported from with the assistance of Brad, in preparation for the closure of that site's discography page. With all this new information now integrated into the wiki, Brad also built a custom "Collections" extension. This extension allows wikians to tag which TMBG albums they own, and to display them as a "Collection" on their userpage.

Upgrade From UseMod To MediaWiki[edit]

While UseMod was good for a wiki of a small size, we quickly outgrew it. Being perl-based, it could be quite slow, and would often take a long time to search. Our hosting provider, Surpass, contacted Scott, and asked him to stop running perl scripts on our site. After a couple weeks of investigation, we decided to install MediaWiki. (Coincidentally, hrwiki.org ran into the same problem at the same time, and had decided to go to MediaWiki as well.) Scott found some scripts to convert UseMod to MediaWiki, and began converting the data. In addition, he built some custom scripts that weren't available.

Shortly after conversion, we discovered that links to sub-pages were not brought over properly. For example, a link to "Ana Ng/Lyrics" would show up as "/Lyrics". Brad went through by hand, and fixed the links, and moved the pages to namespaces, which was a feature that MediaWiki had, which UseMod was lacking. On December 17th 2004, the site was officially 100% categorized.

Over the years, TMBW.Net has been posted on several providers. For several years, we were co-hosted with hrwiki.org, the Homestar Runner Wiki. At one point, we were actually approached by Wikia, and they offered to host our site for free. While we were quite honored by the request, Brad chose to keep the site privately hosted, which allows us greater control over our own site. We are currently hosted by vpslink, paid for purely by the proceeds received from affiliate commissions. 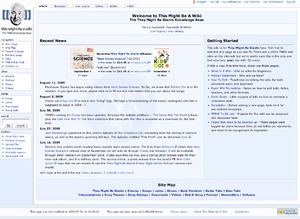 Here are several key milestones for page views and registered users that TMBW.Net has reached over the years. (Note: the page view statistics were compiled using MediaWiki's internal page counting. These stats are deflated, based on the following factors: a) it doesn't account for 2 years on UseMod, b) deleted pages do not count in the page views, c) page caching may cause the true count to be lower, and d) page views of "special pages" are not counted.)

This Might Be a Wiki celebrated its tenth anniversary on February 25, 2013, heralded by various modifications to the site's most frequently used skins to reflect the achievement. They Might Be Giants wished TMBW a happy birthday in the mailing list update for that day with the following text:


The completely awesome and completely complete
TMBG wiki is celebrating its tenth birthday. We want to thank everyone
who has taken part in building it, and if you haven't checked it out--now is the time!
http://tmbw.net

In its tenth year, TMBW hosts over 4,000 articles generated by collaboration among innumerable registered users. In total, nearly 300,000 edits have been made.

This Might Be A Wiki was the top link in the "Other Links" section of the official They Might Be Giants website, theymightbegiants.com, after the late June 2007 site redesign.

TMBW.net is included fourth in the links section of theymightbegiants.com (now titled "They Might Be Elsewhere"), and there is a brief plug for the wiki on the "About" page:

For a complete history of everything TMBG have ever done go to www.tmbw.net, the fan-created They Might Be Giants wiki.

In December 2012, theymightbegiants.com was updated to include a link to TMBW as one of the main navigation tabs at the top of the site.

On 5/5/2004, John Flansburgh officially (and briefly) mentioned the wiki in his regular Mailing List. "Check out the fascinating They Might Be Wiki, where they have archived this John and John interview." Although he got the name wrong (not known if it was intentional or unintentional), it was an important day as it showed that John and John were at least aware of the site.

On 3/24/2006, "eastwikkers" - a technology blog - picked TMBW.Net in a series focusing on best practices on wiki-based collaboration. Here's the article.

Dick Carlson, an instructional designer and program manager for Microsoft, interviewed Brad Will on 9/9/2006 about This Might Be A Wiki and maintaining wikis in general for his podcast.

In 2007, a book in the "For Dummies" series -- "Web Analytics For Dummies" -- made mention of TMBW.Net's Amusing Search Engine Keyphrases page in a section of the book called "My Visitors Are Searching For What?!".

When you review your search reports, you might discover that some surprising keyword and keyphrases are opening the door to your site. The Web site This Might Be a Wiki (www.tmbg.net) [sic] offers a list of amusing search engine keywords and keyphrases that took visitors to tmbw.net for one reason or another, including linky dinky, bicycle wrecks, how to become a robot, and help me match my clothes. Get the picture? Some keywords that your visitors use might give you a good chuckle; others may disgust you; and still others can offer you insights into products, services, content, and customer service answers you could be offering. Unfortunately, others could be wasting your Benjamins.

(To read a snippet of this book, check books.google.com.)

In 2010, the Atlanta Music Guide asked John Linnell about TMBW.Net. Below is a snippet of that article:[1]
[AMG:] The band also has its own Wiki web page, a knowledge base choc-a-bloc with information, including setlists from shows 20 years ago. There’s a stunning amount of information there.

[JL:] We rely on that for a lot of information. We look at that for setlists of the town we’re in to see what we played the last time around.

[JL:] It’s incredibly useful. Somebody is definitely keeping track, writing stuff down. It’s all available in one place; it’s great.

In 2011, TMBW.Net had the distinctive honor of being selected #10 in the Denver Westword blog article Ten ridiculous wikis to cure your boredom with just one click: