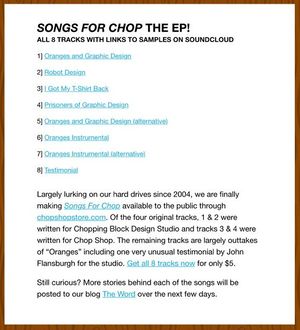 Songs For Chop is an EP compiling They Might Be Giants's contributions to The Chopping Block over the years. It was released via the Chop Shop.

The album cover is from a never completed massive TMBG website we were doing to replace the presidents [...] There was another version that never got out of the idea stage. But this version used in the cover was going to be an interrogation room for the home page and the rest was underground. Except the kids stuff was in the sky in a blimp.