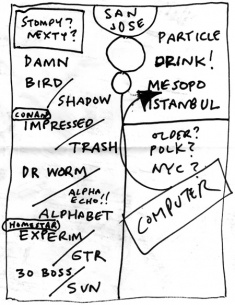 My first TMBG show ever, and though I am tired and sunburned, it couldn't have been better. I was quite taken with how tightly the band performed the new material as well as how much the crowd was into it. Highlight of the show was the massive amount of energy put forth during The Guitar. I've never seen a band jump about so much.

I'm sorry for the short length. I'm still trying to fully absorb what I had just experienced a few short hours ago.

This wasn't a great concert, but not because of the band (they were great, actually). The crowd was much too drunk and unfamiliar with the band to really appreciate them, it seemed. They just kind of stood around, motionless. There weren't too many in the audience either. However, this proved to be a bit more intimate, even if it was outside.

The set was short, as it was part of a festival, but I'm glad I saw it! Especially for such cheap tickets (something like $7.) Also noteworthy was that Fountains of Wayne followed with almost as great a set.

I actually thought this was a great concert -- in terms of TMBG's performance and professionalism in the face of a tiny tiny crowd.

I think the problem with this concert was that it wasn't heavily promoted -- I found out about it about 2 days beforehand -- so there weren't a ton of fans there.