From This Might Be A Wiki
< Shows
1 wikians attended: TDK 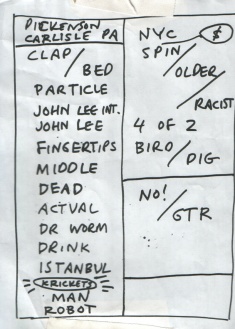 They Might Be Giants
— with Patrick McGrath opening —
Dickinson College in Carlisle, PA
September 20, 2002

Review by TDK:
Clap Your Hands: For the 'stomp your feet' portion, Flansburgh stomped his way down the extreme edge of the stage, as close as he could possibly get to the front row of audience members without falling onto somebody's head.

In the Middle: John Flansburgh fills in for his absent wife.

She's Actual Size: With the swing portion, the dial-a-drum solos and the new 'shitty shitty blues' intro, this is a damn long song.

Spin the Dial: We got to see TMBG perform "It's Only Rock n' Roll" by the Rolling Stones and "Time After Time" by Cyndi Lauper, as well as something I cannot recall.

Older: Linnell causes the band to lapse into one of the Spin the Dial songs during the long pause.

Violin: Not on the written setlist.

Review by jedicat:
after driving for hours to carlisle, PA from NYC, my friends and i arrived at the ATS auditorium. tmbg were already on stage, playing "bed bed bed." the venue was small, and great, and tmbg played with the oddities of its structure during their set.

they did a lot of improv, including an intro to dr. worm about how much they "hate the worm song." they played "fingertips", and "spin the dial," where flansburgh did his own version of "time after time" along the lines of "i'm a pweddy, pweddy pwincess....WAAAAAINBOWS!! W-A-I-N-B-O-W-S!!" the next song they did, he refrained his improv :)

at another point, they were talking about how we shouldn't mess with the dickinson college security ("soviets!"), and asked us to wave at them. linnell noticed that the seats in the auditorium swiveled sideways, and instructed those who were sitting in those seats to swivel towards the light room in the center of the auditorium.

the first song of their encore was "violin"...they warned that it was going to be a disappointing encore, but they LIED!

all in all, the show was great, and i wish i was able to see it in its entirety.

Anyway, pretty much everything I remember has already been said. I think there was a U2 song during "Spin the Dial," probably "Beautiful Day."

During the two "Triangle Man" verses of "Particle Man" some of the audience made triangles with their index fingers and thumbs and held them up in the air. From the middle of the floor I could see a unorderly row of triangles all along the foot of the stage. (don't know if that's a tradition or not; feel free to edit if so...)